Home The Average and The Exceptional

The Average and The Exceptional 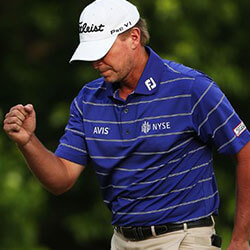 Two weeks ago, I was indeed fortunate to have been given a couple of all-days, all-access passes to a PGA tournament.   I was thoroughly jazzed because it was a chance to share with my three boys the excitement of watching the best golfers in the world practice their craft – up close.  I wanted then to see for themselves what the Tour advertises:  “These guys are good.”

It was awesome.  I’m not trying to rub it in.  It really was incredible.

Watching ANY sport on TV does it a disservice.  NFL players are far bigger and quicker than cameras can translate.  One truly understands how incredibly fast and dangerous 190 MPH is when a NASCAR driver blows by on a straight-away with three or four other drivers just inches of their bumper.  And the site of a 7-foot, 300 lb Shaq quiets even the most “boisterous” hoops observer.

Sitting behind the first tee, watching group after group put their first balls in play – names we knew, names we didn’t – it didn’t matter – it was humbling and inspiring all at once.  The distance and accuracy of these players was like nothing I’ve ever seen.  From where we sat we could overhear the shot placement strategy conversations they had with their caddies.  We then watched them put the ball within a few yards of what they discussed.  300 yards away!   The murmur of astonishment repeatedly rippled through the crowd.  We were all incredulous of the consistency among this elite group.

Deciding to follow a couple of groups around the course, we began to notice other things about these guys:

The vast majority were fit.  Really fit.  I’d never thought of golf as a weightlifting, cardio kind of sport but there was no doubt that most of these players spent time in the gym.  Their physical preparation off the course was apparent and was almost highlighted by the “uniforms” of their corporate sponsors.  Every swing demonstrated their physical power, flexibility, and coordination.  Professional perfection.

They didn’t chit-chat.  The focus that these players kept over four hours was riveting to watch.  They rarely, if ever, spoke to each other.  They kept their conversations with their caddies to a sentence or a couple of words.  One could almost touch the tension in their minds as they worked out shot placement.  The game seemed to be played in their heads.

They really wanted to win.  One could see the agony in their eyes when a putt went astray.  Even the guys that were five shots out of the lead knew that sinking a few putts would put them back atop of the leader board – they wanted perfection.  In the absence of that, was resiliency.  If they hit a bad shot (relatively speaking given my 16 handicap) or missed a putt they recovered almost instantly – looking forward to the next shot.  They didn’t dwell in their errors.

The most remarkable lesson was brought to bear as we followed the final two groups off the 18th green on Saturday.   After the players exited the scoring tent, they marched up toward the clubhouse…and stopped.  They stopped on the practice green and spent the next hour working out putts.  Finishing there, they migrated to the driving range – and continued to practice until the sun disappeared behind the trees.

I walked back to the car awestruck, inspired, and slightly amused.

Thinking about our own careers – whether it’s sales, sales management, leadership – frankly anything we pursue either professionally or personally:

These PGA players do – and every day they make that choice.

So there is only one thing left for us to do.