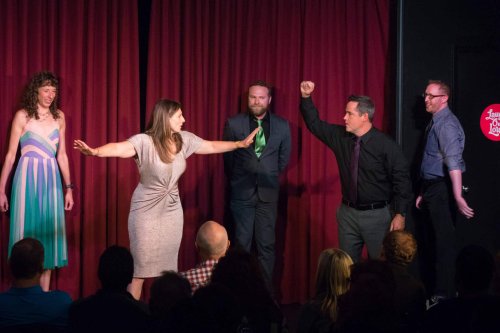 How a Comedy Theater Improvises Through Business Disruptions

Laugh Out Loud Theater was born in tough times. Owner Lillie Frances purchased a failing comedy theater in 2007 with the intent to rebrand, renovate, and make a splash. It officially reopened right before the 2008 financial crisis fundamentally changed the market.

Despite a global recession, Laugh Out Loud was able to break even during their first year. Audiences were slow to come back at first, but as Lillie puts it, “They needed to eat, laugh, and drink. All things that we provide.” As a result, those years following the immediate hit of the Great Recession saw some of the theater’s biggest crowds. They sold out, and they sold out often.

Unlike stand-up comedy specials that are written, rehearsed, performed, and rewritten until perfect, improv is made up on the spot. It’s the pure kinetic energy of capturing lightning in a bottle, or in this case, on stage. So how can you build a successful business when by the nature of the form you don’t know what the show looks like? Years of training and expertise allow Lillie to think quickly on her feet, adapt to new situations, communicate, and collaborate— which is also the alchemy performers use to create hilarity out of thin air.

After Lillie graduated from Northwestern University with a degree in Theater, she quickly learned that scripted work would not be for her. “I liked saying my own words, and I liked making stuff up,” she explains, so she naturally gravitated towards Chicago’s renowned improv community. She took classes and began performing regularly, and that led to teaching.

Lillie worked at the famous Second City theater in multiple capacities—directing a touring company, leading corporate trainings, and teaching in their training center as a core faculty member. She did the work, she put in the time, and she built the skillset she needed to pursue her entrepreneurial dreams.

“I had always wanted to own my own theater,” Lillie says. When she learned that someone was trying to sell one in Schaumburg, a northern suburb of Chicago, she seized the opportunity. “I bought the assets of that business, built a bar, rebranded, and opened as Laugh Out Loud.” With a couple of adjustments, like adding the bar, she was able to transform a floundering business into a robust independent theater with staying power.

Lillie counts being able to pay her performers amongst her successes. “There aren’t a lot of theaters in Chicago that are able or willing to pay performers.” When she created her own theater, it was important to Lillie that she put on professional shows and that her performers were valued as professionals. “It was a huge success to show that you can have a theater where you do pay people; it can be done.”

For Lillie, it’s not just about the money. It’s about treating performers with dignity and camaraderie, and it’s created a ripple effect. During the coronavirus outbreak, Lillie started posting weekly giveaways on the company’s Slack channel. HomeChef boxes, a mystery game, and even nail polish have provided a bright light for the cast and crew with people congratulating each other and getting really into it. However, there was one giveaway Lillie remembers as being especially meaningful because of the way the cast and crew rallied around it.

Someone contacted Lillie to tell her they’d like to sponsor a $100 Instacart giveaway so that cast members who were really hurting would be able to buy groceries. “So I did that,” Lillie recounts. “And 2 other people came forward to each sponsor another $100 giveaway.” The acts of generosity have been driven by Lillie’s leadership. Her desire and determination to invest in her staff have inspired them to invest in the theater and in each other now that the business has fallen on harder times.

“It has decimated us, and it’s incredibly scary. Our whole business is social gatherings. It’s people gathering to go to a comedy show and eat and drink and laugh together.” As she looks toward reopening, Lillie says she will continue to adjust operations. Tables will be kept further apart, and accommodations will have to be made to ensure performer safety as well.

The theater closure hit especially hard given the seasonality of Laugh Out Loud’s business. Profits from November through April allow the theater to bank money to get them through the slower summer months. “Not only did our business go down to zero income overnight, but we also are going to reopen during our slow time….with a limited capacity.”

Lillie is working with her landlords to try to make adjustments on her rent, applying for every grant she can, and trying to “white knuckle” it through the pandemic. “I think that if we can make it through to the other side of this, what we are going to see is similar to what happened in 2009–11, where people don’t have a lot of discretionary funds, they’re going to need to laugh, and they’re going to need to drink. And we can provide both of those things.”

Marketing Efforts Through the Closure

There’s something special about live theater, and it can’t always be easily translated to the screen. But that doesn’t mean Laugh Out Loud was willing to sit back and watch as the coronavirus pandemic wreaked havoc on the business’s financial health. Instead, they sent out an email to their audience with the delightful subject line, “Please Don’t Make Us Do Online Shows,” asking patrons to purchase Social Distance Ticket Packages for once the theater was up and running. They also opened donations on Goldstar, a platform they usually use for discount tickets when a show doesn’t sell out. These measures have allowed them to maintain a relationship with their audience and generate some working capital while they’re prevented from carrying on business as usual.

A Financial Lifeline Through the PPP

“The application was easy,” Lillie says of the Paycheck Protection Program process. “We were approved for funds right at the end of the first round.” Waiting for them to come through was a bit of a “nail biter,” as Lillie puts it, but it came through in the nick of time for her next payroll payment.” Given the restrictions on theater opening, Laugh Out Loud’s PPP loan provided the business with a lifeline to pay its staff and cover theater costs during the closures.

It’s easy to get bogged down in fear, Lillie explains. Her trick for overcoming fear in a time of great uncertainty? “Focus on the next thing you have to do,” she says. Good advice for us all.