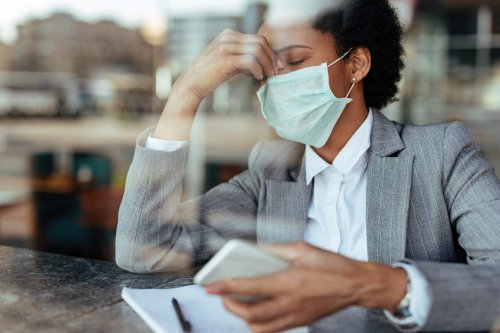 Expert analysis of available data shows that COVID-19 infections and related deaths are hitting minority communities hard. The issue is not genetic but instead due to “a legacy of structural discrimination.” For the public good, fixing these inequalities is a long-overdue moral and ethical shift that can’t be quantified. From an economic perspective, McKinsey estimates that the “US economy could benefit to the tune of $1.5 trillion.”

A deep dive shows the full effect of the coronavirus on minority populations, but even looking at a few statistics gives a glimpse into the disproportionate impact that has occurred.

A report from Public Health England states, “People of Chinese, Indian, Pakistani, Other Asian, Caribbean, and Other Black ethnicity had between 10% and 50% higher risk of death when compared to White British.”

The COVID Data Racial Tracker shows that in the US, “…Black people are dying at a rate nearly 2 times higher than their population share.” Their data showed similar incongruity for Hispanic/Latino communities—their percentage of coronavirus infections and related deaths is much higher than their percentage of a state’s population. Asian and Native American communities, where data was available, follow suit.

Data collection challenges—including incomplete data, non-standard metrics, and under testing—can impact accurate analysis of the underlying problem and thus hamper the ability to address the root cause.

For example, the Public Health England data showed that “Black males were 4.2 times more likely to die from a COVID-19-related death than white males.” However, when the analysis was revised to include other factors, including obesity and comorbidities, they found that “there is no difference in the likelihood of being admitted to intensive care or of dying between ethnic groups.” So the initial analysis using incomplete data masked underlying risk factors.

Tracking the same metric defined in the same way is critical for rolling up data for analysis. However, NPR‘s analysis of the data shows that isn’t happening: ”Major holes in the data remain: 48% of cases and 9% of deaths still have no race tied to them.” That means almost half of the cases have incomplete race information.

Non-standard data includes inconsistently categorizing metrics, such as race. Christopher Petrella, director of engagement for the Antiracist Research and Policy Center at American University, tells NPR, “West Virginia—which claims to have race data for 100% of positive cases and 82% of deaths—only reports 3 categories: white, black and ‘other.’“ Compare these classifications to the 2020 US Census, which has 14 defined race categories and the option of writing in a race description. Other states have similar issues where race categories are limited or combined in surprising ways. This disparity makes it challenging to analyze COVID-19 data and census tract data together.

Under testing creates another prevalent data issue. Public Health England acknowledged that some of their analysis used data based on who had received tests—but most of those tested were in the hospital. “Confirmed cases therefore represent the population of people with severe disease, rather than all of those who get infected.”

These under testing issues also exist in America, according to NPR. “In 4 out of 6 of the largest cities in Texas, testing sites are disproportionately located in whiter neighborhoods.” Texas is not unique—a scan of recent headlines shows that many states are scrambling to ensure testing is available in minority communities.

Why Minorities Are Impacted More

Even with incomplete data, analysis shows structural inequalities—related to housing, work, and access to healthcare—contribute to the impact of the virus on minority communities. The CDC sums it up: “Where we live, learn, work, and play affects our health.”

Minorities hold a larger percentage of jobs that require them to work and be in close contact with others. And many have to work as they do not have access to unemployment or sick leave. For example, the CDC indicates, “Hispanic workers account for 17% of total employment but constitute 53% of agricultural workers; Black or African Americans make up 12% of all employed workers but account for 30% of licensed practical and licensed vocational nurses.”

Cultural and language differences can cause communication issues, resulting in distrust during treatment and preventative phases. WRAL, a news station in Raleigh, North Carolina, shares a first-person account of a Hispanic woman’s challenge when her sister contracted and died from COVID-19. As the only member of the family who spoke English, she bore the burden of translating between medical staff and family members.

Minority groups suffer from comorbidity or underlying chronic health issues, which amplify COVID-19 risk, at a higher rate than non-minority groups. “People of Bangladeshi and Pakistani background have higher rates of cardiovascular disease than people from White British ethnicity, and people of Black Caribbean and Black African ethnicity have higher rates of hypertension compared with other ethnic groups,” according to Public Health England. And McKinsey says, “Black Americans were already twice as likely as their white peers to die from diabetes, hypertension, and asthma.”

Access to healthcare may not be the norm for minority groups. According to the CDC, “Compared to whites, Hispanics are almost 3 times as likely to be uninsured, and African Americans are almost twice as likely to be uninsured.” Many minority patients also have difficulties with transportation or finding a facility that’s open during an individual’s non-working hours.

How to Move Forward

There is no quick fix for the inequality issues, but steps can be taken to reduce the immediate impact of COVID-19 on minority groups. This requires coordinated efforts between public health professionals, healthcare providers, and community groups.

Collecting accurate, consistent, and standardized data from all communities is key. This includes not only data related to identifying outbreaks and risk factors, but also data related to community impact. Per McKinsey, “Relevant information includes (but is not limited to) rates of infection, access to healthcare providers and testing, jobs lost, and small business loans allocated.”

Public health professionals focus on “health from the perspective of populations,” which puts them in a unique position to influence community organizations, healthcare workers, and the public. Per the CDC, they can help healthcare providers “understand cultural differences among patients and how patients interact with providers and the healthcare system.” And they can work to counter misinformation by using culturally relevant channels. For example, Louisiana’s public health department collaborated with Big Freedia, a celebrity in the New Orleans hip-hop music industry, to reach the Black community with factual information about COVID-19.

For healthcare providers, the CDC suggests that they should provide interpreters to eliminate language barriers, help connect patients with available community services, and focus on reducing implicit (unconscious) bias.

Community-based organizations are well-positioned to act as coordinators. Using their knowledge of what their community needs and what is available from the groups, they can follow CDC recommendations to help their community get medical care and introduce them to services, “such as grocery delivery or temporary housing, that help them practice social distancing.”

McKinsey says: “40% of the revenues of black-owned businesses are located in the 5 most vulnerable sectors—including leisure, hospitality, and retail—compared with 25% of the revenues of all US businesses.” Community organizations could help minority businesses secure loans, grants, or venture capital to help them succeed despite the pandemic.

Supporting minorities who are disproportionately affected by coronavirus must be a short-term goal during this pandemic. Long-term, inequalities must be addressed to eliminate racial health disparities. This change requires society to commit to accurate data collection, funding to enable changes, and a devotion to eliminating discrimination. It’s a challenge that society must and will overcome.