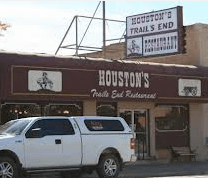 I spent last week on the road from the seat of my motorcycle. My daughter, an old friend, and myself were heading to the Grand Canyon for the week. I’m a big fan of abandoning the Interstate whenever I can (particularly when on the motorcycle), so we opted to visit the Canyon via Hwy 89—stopping at Bryce Canyon on the way down and Zion National Park on the way home.

To say it was an awesome trip would be an understatement, but that’s not what I want to talk about today.

We had a late lunch one day in a little restaurant in Kanab, UT, Houston’s Trails End Restaurant. I have pretty simple tastes, and really like these out-of-the-way roadhouse-type restaurants and cafes. The food reminds me of the meals my grandmother used to prepare and the service is usually pretty good. Our waitress Kaytee, was no exception.

I don’t know if there’s ever much formal training in one of these little diners. Sometimes the waitress is a more mature woman who has obviously been doing this for a while, sometimes it’s a young gal like Kaytee; I’ve even been served by an old guy in a cowboy hat wearing pliers on his belt. When asked about it he said in a deadpan you’ll only find in a small rural town, “They’re for irrugate’n. What else would they be fer.”

From the minute we sat down, Kaytee was delightful. I don’t think I ever even had the thought, “I wonder where our waitress is?” Before she was at our table making sure we were OK and had everything we needed. I’ve tried to think of what it was that made her such a great waitress, and wasn’t too surprised to recognize that it wasn’t rocket science:

Although these three traits Kaytee so eloquently reminded us were important are pretty basic, I’m convinced they are the cornerstone to a good customer service approach. We’ll likely never have the pleasure of being served by Kaytee again, but she definitely made a good impression on us.