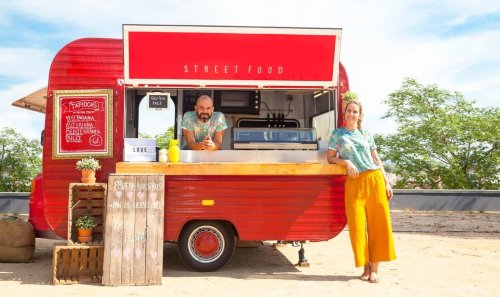 Why Food Trucks Are Still All the Rage

Regardless of where you live, it’s likely there’s a vibrant food truck scene. From seafood to pizza, churros to barbecue, restaurants on wheels have become an intricate part of the culinary world. Heck, if you simply turn on the TV, you’ll see food truck entrepreneurs on ABC’s Shark Tank or the sundry competitors of the Food Network’s The Great Food Truck Race (which draws more than a million viewers between the ages of 18 and 49 each episode).

The modern food truck invasion began back in 2008 when The Great Recession caused the labor market to lose more than 8 million jobs. With so many Americans in flux, the low barriers to entry made food trucks a popular choice. After all, it’s not often that a business has a start-up cost less than $100,000. Contrast that with brick-and-mortar restaurants, where it can easily cost more than $400,000 to get started when you factor in real estate, construction costs, kitchen costs, and everything else.

And food trucks have the potential for high returns — between $250,000 and $500,000 on average. Given the stats, it’s no wonder the industry is expected to keep growing. In 2012, the food truck industry was doing $650 million annually. Nowadays, it’s doing more than $2.5 billion.

In fact, the food truck biz is growing even faster than the brick-and-mortar sector. Here’s a handful of the unique benefits driving this boom:

At the same time, food truck drivers often deal with some unique complexities. The biggest one is mobile vending laws. Some towns are surprisingly unfriendly toward food trucks, making it difficult to get a permit or find a legal place to park. In extreme cases, you’re even required to have a toilet located within a short distance of your truck at all times.

Other challenges include health codes, foul weather, vehicle maintenance, limited food storage, insurance costs, and fire codes. Plus, with all the growth in the food truck industry, things have become quite competitive. Not only will you be trying to stand out against a sea of diverse offerings, but there could very well be multiple trucks in your area offering the very fare that you do. For example, if your truck is named Corndog King, but don’t be shocked if your area is also home to trucks called Corndog Heaven, Deanne’s Corndogs, and the Corndog Connection.

Traditional brick-and-mortars have noticed the frenzy surrounding food trucks, and many of them have jumped into the fray. Familiar brands like White Castle, Chick-fil-A, and Starbucks have introduced trucks in some parts of the country. Rather than jostling for position at local food truck rallies, however, these big-name trucks usually visit major events including music festivals and the like.

And as local food trucks achieve super-stardom, some owners take the reverse route and decide to open a brick-and-mortar. This reversal highlights how flexible and exciting the food truck industry can be. It also means that if you’re interested in buying a truck and starting a business, you can probably purchase one from a former food trucker who is now transitioning into a brick-and-mortar location.