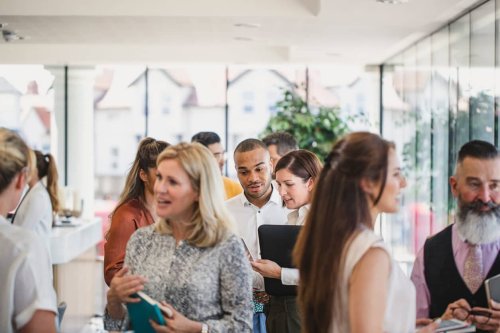 The Future of In-Person Events

Every business owner knows that events build a strong customer base and drive sales. There’s no replacement for the magic that happens when 2 people connect on a personal level. Whether that’s at large, multi-hall conventions with marquee names or local craft fairs, in-person events offer a sales and marketing boost that’s difficult to replicate virtually.

The $180 billion industry includes trade shows, professional sports, and live events like music concerts, festivals, and theater productions. Much of that has gone digital over the past year, with 67% of consumers worldwide saying they’ve streamed live video content.

What does that mean for your business?

The Show Must Go On

For the music and entertainment industry, the COVID-19 pandemic effectively canceled live events around the world. Ticketing company Live Nation reported a 95% drop in revenue for Q3, posting a $319 million loss. While the majority of fans (83%) plan on keeping their tickets for rescheduled shows, no one really knows when that will happen, between vaccination rollout schedules and local regulations.

Meanwhile, Live Nation plans on introducing new technology when events do come back, like seat mapping for social distancing, timed entry, and contact tracing efforts. “From venue sanitation procedures to fan-friendly policies and on ticket purchases and the latest testing options, we are setting standards that will give the fans, crews, and artists peace of mind before, during, and after the show,” CEO Michael Rapinoe told investors on a November 2020 earnings call. “[We] expect shows at scale next summer, but the path to live will not be a straight line.”

But that’s not the end for musicians or performers. While the industry continues to struggle, digital events provide an outlet, from livestreams on YouTube or Instagram to ticketed performances like the viral Ratatouille TikTok musical or Justin Bieber’s New Year’s Eve concert.

These new formats offer more engagement and connection with artists than ever before. Livestreams offer chats, private breakout rooms, and conversations that huge venues just can’t accommodate. “Obviously people want the music more than anything,” John Petrocelli—CEO of Bulldog DM, a livestreaming company—told Forbes. “We’ve learned along the way, these experiences are always better when the viewer has been transformed into a participant.”

Of all the types of live events, sports represent the greatest financial (and frankly, emotional) impact. As the 11th largest industry in the US—worth $750 billion—canceling sports games and seasons also feels like a threat to the American way of life, a tradition that continued even through World War II.

But COVID-19 stopped everything, at least for a time. “What makes sports so enthralling—the thrill of victory and the agony of defeat, to steal a phrase from ABC’s Wide World of Sports—is the same thing that makes sports channels so useless right now,” wrote Kevin Draper for the New York Times. “The second a game ends, its value drops precipitously. Nobody wants to watch sports when they already know the outcome.”

Eventually in 2020, sports restarted, many with shortened seasons. Even during a pandemic, bubbles held firm and champions were crowned. While watching sports broadcasted on television is nothing new, it may have felt strange to see iconic ballparks and stadiums sitting silent and empty (or worse, filled with creepy cardboard cutouts).

“Sports feast on tradition and a kind of intrinsic passion that seldom is in danger of dissipating. This allows them to build their businesses with almost blind optimism,” Jerry Brewer told the Washington Post. “Established pro sports leagues are going to have a rough decade, and those still trying to gain footing are at risk of being forced to shut down. The adjusted viewing habits of fans and their willingness to spend money on tickets to games, even after there is a coronavirus vaccine, is a critical thing to keep an eye on.”

It’s easier than ever to host your own digital event to expand your reach or keep up employee morale—try recording training sessions, hosting your own conference, throwing an educational webinar, scheduling 1:1 tutorials, or mixing it up with more exclusive networking “happy hours.”

“At the end of the day, events are still all about the human experience,” writes event marketer Tessa Barron for Drift’s technology blog. “We’re all in the same situation, working from home, unsure about what comes next. Even though we can’t all meet in person, your digital events can still create a sense of connection. Now is the time for empathy and community more than anything.”

Barron works for webinar platform On24, which, like Zoom, has seen triple-digit growth as marketers pivot their event dollars to digital. The On24 team recommends launching webinars mid-week, ideally at 2 PM ET, for the highest engagement.

The way forward for business owners will be a hybrid approach. There’s no substitute for the personalization and connection that comes from spontaneous moments at an in-person event. In the meantime, business owners and event planners alike will have to think about their virtual events as stepping stones, creating smaller gatherings with out-of-the-box ideas like cooking or yoga classes, roundtable discussions, or community-focused events.