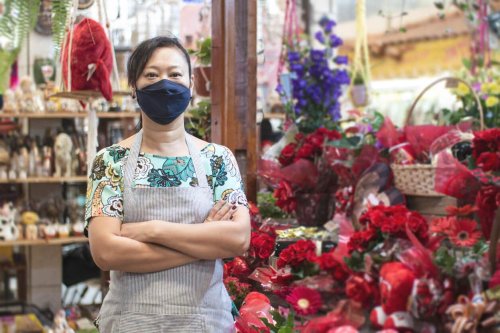 A good friend of mine grew up in the Bronx. His parents were Korean immigrants and owned a small jewelry shop near the apartment where they raised their 4 sons. From a young age, my friend knew he was different from the other kids. He looked different from most of them, but he was also treated as an outsider. Racist taunts were a daily occurrence, and beatings happened almost weekly.

His parents also experienced variations of this abuse. Their small business was targeted by vandals, and they were mocked for the way they spoke English. Robberies were a frequent occurrence for all the businesses in the area—but the crimes in their shop tended to be particularly vicious.

While my heart aches for my friend and his family, I know that their experiences aren’t unique for minority-identified people in our country. And the challenges have only been exacerbated for Asian Americans due to racist sentiments stirred up by the pandemic. Now is an incredibly challenging time to be Asian in America.

COVID-19 has been a scourge that affects all of these entrepreneurs, who hail from diverse racial, religious, or economic backgrounds. But the severity of the challenges and the resources available to help in the recovery varies, often along racial lines. The fact is that underrepresented groups in America are taking some of the biggest tolls.

“The COVID-19 pandemic is placing major challenges on the US workforce,” explains a report on job loss inequity. “In particular, Black and Latino workers, despite suffering from major upticks in unemployment, have been disproportionately overrepresented among workers who cannot work from home, placing them at elevated risk of contracting the coronavirus. Furthermore, these in-person workers (although also true of those working from home) require assistance with the care of children and other dependents. People who have lost their jobs or who have been furloughed face grim prospects of finding employment…Undocumented immigrants, many of whom have been on the front lines providing basic services and food supplies to the American public, have been completely left out of stimulus funds, as have their US-citizen spouses.”

It’s clear that multiple factors lead to these disproportionate impacts. And the situation isn’t getting much better.

The horrific attacks that occurred in the Atlanta area in March of this year brought attention to a growing trend of violence against Asian Americans. Make no mistake—this attack was no outlier. Rather, the violence that claimed the lives of 8 innocent victims was merely another sad entry in the books.

In major cities across the nation, anti-Asian hate crimes have soared 150%. In many instances, women are the targets. Even with impassioned calls to “Stop Asian Hate,” the situation is far from over. Recent attacks have occurred in broad daylight, with multiple people witnessing the crimes but doing nothing to intervene. In many ways, the apathy on the part of the witnesses is almost as disturbing as the rage from the attackers.

Combining these issues of retribution and discrimination with the broader challenges of the pandemic is a daunting reality for many Asian American entrepreneurs.

While Asian American business owners struggle with challenges on nearly every front, they remain a crucial element of the US economy and culture. There are currently about 2 million Asian-owned small businesses in America. These businesses employ more than 3 million people and create $700 billion in GDP each year.

But it’s harder for Asian Americans to access and leverage recovery resources. Language barriers can sometimes play a role, as well as lower odds of qualifying for support such as Paycheck Protection Program (PPP) loans. This inability to qualify for PPP loans often comes down to whether a business has previously established a relationship with a credit union or bank. About 75% of Asian American businesses fail to meet this requirement, as do 95% of Black-owned businesses and 91% of Latinx-owned businesses.

“The spike in Asian Americans’ unemployment earlier in the pandemic resulted from a combination of factors, including their concentration in jobs impacted by the pandemic,” reports Market Watch. “Almost a quarter of employed Asian Americans work in hospitality and leisure, retail, or ‘other services’ industries like personal care, according to a UCLA report published in July…The Asian American unemployment rate, like those of other racial and ethnic groups, has recovered considerably after peaking in the spring. But Asian Americans saw the steepest increase in long-term unemployment between the fourth quarter of 2019 and Q4 of 2020, climbing 25 percentage points, according to a recent Pew Research Center analysis of US government data.”

Yes, the situation is grim. But make no mistake: if our nation is to recover from the devastating effects of the pandemic, Asian Americans will be major contributors. And they will continue shaping our economy and business culture for decades to come. By 2055, Asian Americans are projected to be our nation’s most prominent immigrant group.

Here’s How You Can Help

While violence and discrimination against Asian Americans are problems in cities throughout the nation, millions of good people are rising up to promote equity and defend those in need. President Joe Biden has set the tone.

“Too many Asian Americans have been walking up and down the streets and worrying, waking up each morning the past year feeling their safety and the safety of their loved ones are at stake,” said the president in a recent statement. “They’ve been attacked, blamed, scapegoated, and harassed. They’ve been verbally assaulted, physically assaulted, killed…The conversation we had today with AAPI leaders, and that we’re hearing all across the country, is that hate and violence often hide in plain sight. And it’s often met with silence. That’s been true throughout our history, but that has to change—because our silence is complicity. We cannot be complicit. We have to speak out. We have to act.”

Our positive actions can start small. For example, you can refrain from using derogatory language that mocks Asian Americans or attempts to slander them regarding the COVID-19 pandemic. Then take this concept a step further by standing up to negative statements and slurs from others.

It’s also important to educate ourselves. Discrimination against the Asian American community is nothing new. Take a week to watch this enlightening series put together by PBS. You should also prepare yourself to be a defender of Asian Americans by participating in bystander training to better understand how to intervene in a way that doesn’t escalate the situation and imperil yourself. When you witness hate crimes, report them here.

There are plenty of worthy organizations that could use your donations. Examples include:

Now is the time to stand up for the Asian American community. Support them. Defend them. Don’t let accusations and slurs from others go unaddressed. Don’t melt into the crowd if you happen to witness hate crimes in public.

It’s not easy to stamp out centuries of hate and prejudice, but you can start by making life better for the Asian Americans around you. Commit now to visiting an Asian-owned business this week. It’s a small act—but it’s part of a movement that will help these businesses recover from the pandemic and set a better course for the future.