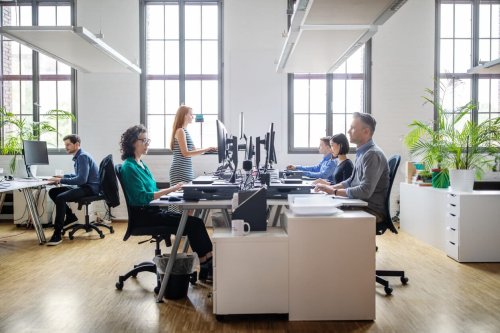 For the majority of 2020, office buildings around the globe stood empty. Rows and rows of cubicles, shared desk spaces, phone booths, cafeterias…what was once a space for connecting with coworkers now looks very different in the context of a global pandemic. 70% of global offices include some sort of open floor plan—communal worktables, workstations, kitchens, or hangout areas—so what happens now?

The open office floor plan spawned haters well before the pandemic switched many employees to remote work. Introduced in the 1960s to democratize the office landscape and increase collaboration and creativity, open offices have become the norm for most workers today. By the early aughts, Google, Facebook, and other high-profile tech companies tore down cubicle walls and rebranded offices as “makerspaces.” Executives came out of their corner offices and everyone, regardless of rank, sat close to one another to facilitate a constant flow of ideas.

But the flow of ideas didn’t happen.

In fact, Harvard Business Review found that open floor plans decreased collaboration, not increased it. Face-to-face interactions dropped 70% for companies implementing open plans. Employees, struggling to focus, throw up technological walls instead—sound-proof headphones, Slack, email, or other messaging services—to choose how and when to interact. Ironically, all of this makes it easier not to respond or collaborate.

“The open-plan office has always been in some ways in the interest of the company rather than the worker because it socializes productivity,” Intel’s UX technologist Melissa Gregg told the New York Times. “It forces workers to watch each other’s work, and it creates very few spaces of privacy for individual workers.”

Instead, open office plans ushered in an era of hustle culture. With bosses watching your every move, employees stayed later and worked harder, with their productivity, collaboration, and creativity—the very ideas that encouraged open floor plans in the first place—declining.

“We saw a big pendulum shift where everyone came out of private offices and big cubicles into the open office, and that was an epic fail because 1 size does not fit all. The open office has gotten a really bad rap as a result of doing it really badly,” Melissa Hanley, CEO of design firm Blitz, told Business Insider.

In the context of the pandemic, the open office concept becomes horrifying. 52.9% of Americans believe open offices will increase the spread of COVID-19, and 41% think their office will be a “hotbed of infection.”

Return-to-work plans make office life feel different: no more high fives or handshakes, no more communal candy jar. “Things that people love, like gummy bears, huge jars of gummy bears everywhere, aren’t going to be there,” Salesforce CEO Marc Benioff told the New York Times. “They aren’t going to have a lot of trinkets on their desks because we know that also spreads droplets.”

Salesforce is one of several companies grappling with how to get employees back to the office safely. In addition to changing behind-the-scenes architectural details like HVAC systems and UV deep-cleaning practices, new office plans give employees back more space. Between 2018 and 2019, the average office space per seat dropped by at least 14%—social distancing guidelines reverse that trend.

Other short-term safety measures include:

“I just feel very strongly that we have the ability to do something very powerfully here and to motivate this new workplace, just like we did in the prior workplace,” Benioff told the New York Times. “Technology is actually going to become a critical part of managing our workplace, where before it was not part of our culture.”

But there’s plenty of architectural differences coming into play that may change what offices look like over the long term.

“Open floor plans are most definitely going to disappear,” Rhiannon Staples, CMO at Hibob, told Business Insider. “I feel like it was already on its way out, and this was the kick it needed to get it out the door.”

As you’re planning on bringing your team back into the office, whether it’s part of a larger building or a rented WeWork space, consider how the design of the space makes your employees feel safe. “Providing the safest work environment is table stakes,” Liane Hornsey, Chief People Officer at Palo Alto Networks, told Fortune. “We’ve made many improvements, from creating a touchless environment in common areas to implementing new technologies and equipment that boost air quality. We are continuing to reimagine our facilities as we prepare for an office that will once again bring us all together.”

As you redesign your office space, think about:

In the meantime, the future of the office looks a lot like your home setup. Regardless of employer size, most companies are considering hybrid approaches moving forward based on employee desire. 80% of survey respondents to a McKinsey & Company study enjoy working from home—so as you build your return-to-work plan, know that you have options.

The world has changed. Your offices will, too.