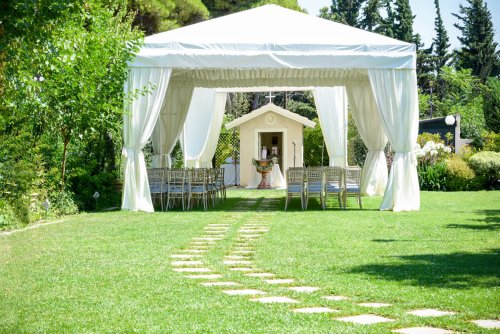 In the opening to the iconic 2008 film 27 Dresses, leading lady Katherine Heigl hires a taxi cab to shuttle her across New York City between same-day weddings for best friend #1 and best friend #2. It’s played for laughs, of course (it is a romantic comedy), but the scramble to do the YMCA in time may look familiar to many 20- and 30-somethings caught up in “wedding szn” madness.

Americans spent more than $54 billion on over 2 million weddings last year, throwing bigger, louder, and more expensive weddings that crashed in the wake of COVID-19.

Wedding season typically lasts from Memorial Day to the end of October. Three October weekends claimed the top spots as the most popular wedding dates in 2019. Couples spend $28,000, on average, on their ceremony and reception, with nearly 60% increasing their budgets after planning begins. The majority goes to the venue, but the next highest expenses are for top vendors like bands, photographers, and florists.

“Weddings employ so many people,” photographer Leila Brewster told Fast Company. “It’s an entire chain system. You hire me as your photographer, but I hire another person to come assist me. I hire a lab. I hire my album and print company.”

The average wedding books at least 15 vendors, causing a domino effect from cancellations that ripple across the wedding industry. Between legal limitations on gatherings in many states, lockdowns on travel, and general COVID-19 fears, 96% of couples rescheduled their weddings this year.

Couples that don’t want to reschedule—or have already rescheduled more than once, losing their deposits—are turning to more intimate gatherings, dubbed “micro weddings.” These weddings maintain the same traditions, from the cake-cutting to the bouquet toss, but host only 50 attendees or fewer.

“More is not always necessarily more,” Stefanie Cove told The Knot. “A micro wedding is for the couple who wants to really focus and spend the majority of their budget on the smaller details, whereas it might be difficult to replicate the same experience for, say, 200 guests.”

That’s what Instagram influencer Carly Riordan did for her wedding, a tasteful backyard affair with just their closest family. “There’s a difference between planning a small wedding…and planning a small wedding during a pandemic,” she writes on her blog. “We didn’t want to wait 2 years to get married just to have a party. Was this the wedding we each dreamed of? No. But it ended up being so perfect and so special. We had our immediate families there, and that’s really what mattered to us.”

Micro weddings give couples a chance to focus on the line items that matter to them, so as a vendor, it’s a chance to go big on the details. Riordan focused her budget on photography and flowers, along with smaller touches like monogrammed napkins and rented tables and chairs.

Many venues and vendors pivoted to create micro-wedding-specific packages. “We noticed that there was a significant number of guests who wanted to get married on our property with limited guests, limited planning, and limited budget,” Kieran Hales, co-owner of popular Michigan wedding spot Zingerman’s Cornman Farms, told The Knot. The farm now offers a “Tiny Wedding” package that’s COVID-19 compliant. “Couple this with the rise in popularity of micro weddings and elopements, as well as the number of elopement planners popping up, and we knew the timing was right for several reasons.”

…Or Forgo the Gathering Altogether

Canceling wedding plans gave many couples the freedom to do exactly what they wanted: elope. For couples today, the phrase is less about getting hitched in secret and more about spending the day together, alone, or with 1 or 2 family members or friends. Couples still hire vendors—especially photographers—but scale down everything else.

“People want to elope, but they don’t want to sacrifice all the style,” Kat Ferguson, a California-based event planner, told The Verge. She began planning elopements after COVID-19 wiped out her entire wedding season schedule. She launched a new service, The Reimagined Wedding, that specializes in Instagram-friendly, COVID-19-compliant wedding ceremonies. She schedules 3–5 ceremonies a day for couples that want to get married and want it to be special. She told The Verge, “For all intents and purposes, it works just like a Vegas wedding chapel. But the difference is it’s beautiful.”

For more outdoorsy couples, it’s all about the adventure. Elopements have become a vehicle for intense hikes, rafting, or climbing experiences—in wedding attire, naturally. “We’ve seen a really tremendous trend of couples who had originally planned big weddings this year switching to elopements,” Maddie Wilbur, founder of Adventure Instead, told Forbes. “Believe it or not, March was our biggest booking month to date, and April was better than any April we’ve ever had.”

Vendors Must Adapt to a Changing Wedding Industry

“Marriage in the traditional sense is changing,” event planner Emily Pilk told The Knot. “Gone are the days when the success of a wedding was directly correlated to its price tag. Big is not always better.”

The impact of this year goes way beyond canceling or postponing weddings, with a refocus on the institution of marriage rather than just the party to celebrate it. Vendors must adapt to changing preferences, not only to be compliant with health and safety guidelines but to stay in business.

“There’s no way to predict, of course, whether ‘wedding season’ as we know it will even be a possibility by this time next year,” writes Ashley Fetters in The Atlantic. “Small, low-key ceremonies might seem especially appealing now because they can be adapted to whatever restrictions might be in place in a year.”

Whether that’s opening up new event services to plan and execute tiny weddings and elopements, refocusing efforts on backyard-friendly floral arrangements, or investing in new safety equipment, vendors have a long road ahead of them.