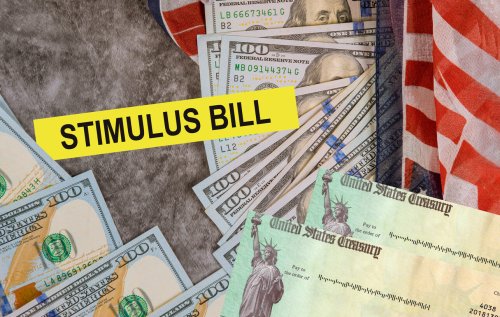 The Next Stimulus Package Is Coming Together in Congress

After months of inaction, it looks like the troubled US economy is finally about to get another round of government stimulus.

The first stimulus package, the $2 trillion CARES Act passed in the early days of the pandemic, was considered a success. The $1,200 stimulus checks and the Paycheck Protection Program (PPP) loans put money in the pockets of beleaguered businesses and consumers.

But the coronavirus pandemic and COVID-19 recession that’s come with it have dragged on far longer than anyone expected. And while the House of Representatives passed the $3 trillion HEROES Act all the way back in May, the Senate refused to consider that relief bill before knowing the outcome of the 2020 presidential election.

Now it looks like Congress is on the verge of passing another much smaller stimulus plan. But the question is which stimulus plan they will pass and whether it will include more PPP loans or another stimulus check for every American adult.

Politico explains that there are 2 different stimulus plans being negotiated in Washington, DC, and neither plan is finalized. On one side in the Senate, a bipartisan group of senators referred to as the “908 coalition” is trying to hammer out a deal that Democrats and Republicans can agree upon. Their nickname comes from the $908 billion relief deal they’ve crafted, which they are just finalizing language and minor points upon, hoping the bill’s bipartisan origin will make both sides amenable to voting for approval.

Meanwhile, Bloomberg reports that Treasury Secretary Steve Mnuchin is negotiating with House Speaker Nancy Pelosi on a completely separate deal. That’s a $916 billion deal, for which Mnuchin has the blessing of Senate majority leader Mitch McConnell and House Republican leader Kevin McCarthy to negotiate. The hope is that if Trump, Pelosi, McConnell, and McCarthy all agree on a relief bill, Congress is likely to fall into line with what their leaders recommend.

With a $916 billion package and a $908 billion relief bill both on the table, it seems like a mere $8 billion difference is a pretty small gap to close. Billions of dollars is certainly a large sum, but $8 billion is a comparatively tiny number when the previous relief package was $2 trillion.

Yet the 2 plans aren’t just off $8 billion from one another. They’re fundamentally different approaches to economic relief and contradict one another on whether they will include stimulus checks, extended unemployment benefits, legal protections from liability for businesses that encounter COVID-19 infections, and other contentious issues.

What Will Be in the Next Stimulus Package?

We don’t know which of these bills will make it to the floor of either house of Congress, let alone whether that bill will pass. But we can look at what both plans currently propose—and these proposals are changing by the day—because there is desire on both sides to pass a deal as quickly as possible.

As CNN explains, the bipartisan Senate bill is seen as a 4-month stopgap measure intended to keep the economy afloat until a new Congress is sworn in and can reach a subsequent arrangement. The deal adds $300 a month in enhanced unemployment benefits, pauses student loan payments, and contains another round of PPP loans—in addition to vaccine distribution and COVID-19 tracing funds.

Very pointedly, though, the bipartisan Senate plan does not include another stimulus check. That’s a compromise between Democrats and Republicans to send a smaller, targeted amount to the unemployed instead of splurging to give every American a big check.

The other, dueling plan Steve Mnuchin is attempting to negotiate with Nancy Pelosi and Senate Democratic leader Chuck Schumer offers that very slightly higher $916 billion. (Pelosi and Schumer call the latest version “unacceptable,” so it does not currently have great momentum.) But President Trump, McConnell, and McCarthy all support that version of the bill, so the 3 most powerful Republicans in Washington are behind it. The bill calls for aid to state and local governments and makes small businesses and schools exempt from legal liability if an outbreak occurs on their watch.

The official Republican plan also includes another stimulus check. But it’s a much smaller check than you received last time.

Will There Be Another Stimulus Check?

The Mnuchin-Trump plan includes another round of stimulus checks, but they’re only $600. That’s a mere half of your previous $1,200 stimulus check from months ago.

Still, that’s the more generous plan offered right now. The bipartisan Senate proposal currently has no stimulus check, only expanded unemployment benefits for those currently out of work.

Yahoo News reports President-elect Joe Biden is in favor of more stimulus checks but it has not committed to any dollar numbers he would seek. It’s technically possible that both Trump and Biden could approve stimulus checks in the months to come. But neither outcome looks anywhere near impending, so don’t hold your breath for another stimulus check arriving anytime soon.

What’s Holding Up the New Stimulus?

The parties disagree on the next round of stimulus checks. Republican leadership wants smaller checks sent out soon; Democrats prefer larger checks with more aid attached. Republicans are also trying to get their preferred legislation through before a new Congress takes effect, while they still hold their lame-duck larger majority status in the Senate.

Another Government Shutdown Is Looming

It’s that time of year again! Another government shutdown is looming, and The Hill reports that Congress passed an emergency funding measure to avert that shutdown for 1 more week. Both parties are expected to tie their COVID-19 relief aspirations to the next bill, and it remains to be seen whether either will have any success.

The incoming Joe Biden administration has not taken office yet, but it has already accomplished one thing—having a clear election winner has finally gotten Congress to consider another stimulus package. Biden may pass yet another stimulus package once he takes office, but for now, all we can hope is that legislators take quick action on fostering the economic recovery that small businesses so badly need.