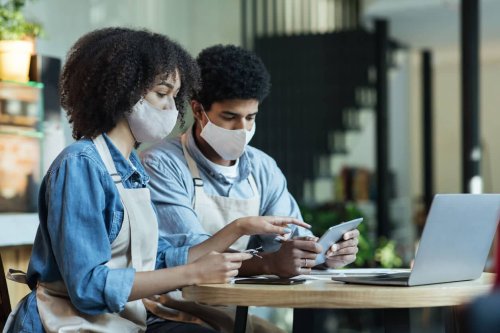 The Post-COVID-19 Future of the Small Business Workforce

The good news is that the American economy has regained 13 million of the jobs lost during the COVID-19 pandemic. The bad news is that 9.5 million people who lost their jobs are still out of work, according to federal labor data reported by The Balance. And it’s a big question whether those 9.5 million lost jobs are ever coming back.

COVID-19 ravaged small businesses nationwide and left millions of Americans unemployed or underemployed. Meanwhile, essential workers had overwhelming workload increases but little financial gain to show for it. And the whole time, the stock market has boomed, and tech companies in work-from-home mode have struck it richer than ever.

The digital transition and upskilling of the tech sector were already a threat to many blue-collar and middle-class workers during the pandemic. Additional challenges around healthcare and daycare have been even tougher for underserved communities left even more at risk of being left behind in the post-COVID economy.

The unemployment rate is back down to around 6%, but the economy is nowhere near normal. Let’s take a look at what economists say the labor force will look like when we do get back to normal—including which workers may struggle most to get back on full footing and what small business owners can do to help these employees while overcoming their own challenges.

Many Workers Still Have Not Returned to the Job

We saw a great number of Americans just plain drop out of the workforce in the years following the 2008–09 recession. That happened again during this past pandemic year. But it was far more drastic this time around.

Nearly the same number of workers dropped out of the US workforce in 2020 alone compared to a 7-year period during the prolonged Great Recession.

That’s just one of the findings of a study on the impact of COVID-19 on the American workforce from the economic forecasting firm Oxford Economics. In fairness, that study also found about a third of those workers have reentered the workforce or are at least actively looking for work again. And the largest declines came at different ends of the age spectrum—young people and baby boomers who decided to retire early.

There is some stigma attached to dropping out of the labor force, as if it indicates laziness or acceptance of defeat. But in this circumstance, many of these workers have seen their industries decimated for more than a year and simply have no opportunity to do work in their trade. Industries that cater to in-person events, for instance, have had little or no work to offer.

Retirement is also considered dropping out of the workforce, and 2 million people did so in 2020. That’s twice as many new retirees as 2019. These people are much less likely to return to the workforce, even if the industries that had employed them fully rebound.

This is not entirely tragic. Many of these people saw their retirement accounts grow handsomely as the stock market performed well during the pandemic. But it’s also a sign that many older workers aren’t comfortable with the health risks of returning to work with the virus and its variants still active.

Economists see a number of other issues at play here.

Workers Are Leaving the Workforce for Many Reasons

“Many people have either quit their jobs or stopped looking for work,” Point Loma Nazarene University economist Lynn Reaser tells the Los Angeles Times. “Some needed to care for children and for parents. Some feared becoming infected at work. Some despaired at finding a job and opted for unemployment benefits. Still others have simply burned out.”

Young people in both the 20–24 and the 25–34 age demographics were the hardest hit by pandemic unemployment, and as such, dropped out of the workforce in great numbers. The Oxford Economics report showed that nearly half of the workforce that dropped out was workers in these 2 age groups.

Yet these age groups are returning to work the most quickly. The 20–24 age demographic has regained 2/3 of its participation in the workforce.

But even when the labor market becomes “normal” again, history shows us that a lot of people who have been temporarily unemployed end up not going back to work. There are institutional reasons for this phenomenon, and these setbacks could be even more lasting in the post-COVID economy.

Any working parent will tell you that school closures and remote schooling have wreaked havoc on their professional careers. Employees have been spread incredibly thin between work and family caregiving obligations. Those obligations often fall more on women and may drive women out of the workforce at a disproportionate rate.

The gender gap numbers from a Mount Saint Mary’s Center for the Advancement of Women study on the impact of COVID-19 on women show some staggering ratios. While 57% of men surveyed in their study said working from home had a positive impact on their careers, just 29% of women said their careers had improved. On top of that, 34% of working fathers said they’d gotten a promotion during the pandemic. Only 9% of mothers got a promotion during that period, according to the study.

There is a complicated myriad of reasons that women face more challenges in the workplace. But the fact that the burden of caregiving falls on women more frequently is surely among the largest of these. And the stereotype that mothers are less reliable employees does not seem to apply to fathers.

Lawmakers could certainly come up with better childcare policy measures. But employers need to understand the challenges working parents face too. Consider making accommodations for any employees you have who are parents.

The Recovery Is Underway, But It’s a Slow Boil

According to monthly data from the Bureau of Labor Statistics, the economy hit its peak on February 1, 2020, with 152.5 million jobs. By April 1, it was down to 130 million jobs.

That job market has been recovering since, and according to a jobs chart from The Balance, we are currently back to 143 million jobs. This isn’t a best-case scenario, but it’s a better-case scenario than what we feared could have been.

Still, these numbers don’t tell the whole story. People who stop looking for work, those who effectively drop out of the workforce—these folks don’t count in the unemployment statistics. So the unemployment rate is something of an undercount.

While the rate is going down, it does not take into account the large number of people who have stopped looking for work because the opportunities simply are not there for them.

When Will the Labor Market Be Normal Again?

Oxford Economics says that “Labor force participation is expected to recover from its historical plunge.” But they also add the qualifier that this will take “the next 2 years,” so it may be quite some time until the economy recovers to its pre-pandemic peak.

And we forget, but the period before the pandemic was one of the hottest US economies we’ve seen in our lifetimes. The unemployment was at just 3.5% in February 2020. The US unemployment rate had not been that low since 1953.

Experts have opinions on when they think the workforce will get back to normal. “We anticipate the unemployment rate should sit around 4.3% by the end of 2022 as the rebound in the participation rate slows the implicit decline in the unemployment rate,“ the firm said in their report.

An unemployment rate in the 4% range is still incredibly low by modern historical standards. And many credible experts do expect a red-hot economic rebound later in 2021 as the economy reopens and normal spending resumes.

What Happens When We Return to Work?

The best and brightest minds are gaming out what the eventual economic recovery will look like. According to a Harvard Business School analysis interviewing several industry leaders, they do expect a full recovery. But it will be one that comes with a new employment landscape that is not what we’ve been told will be the “new normal.”

“Employers have to prepare for a ‘next normal,’” management professor Joseph Fuller says. “Changes wrought by COVID are so broad and so pervasive that they will affect how work evolves after the pandemic’s end.”

“Employees are unlikely to return happily to a workplace driven by the ‘old deal,’ in which the employer sets standard rules of employment and the workforce acquiesces,” he adds. “They will expect not only the right to determine the adequacy of workplace safety measures but also expect employers to consider their individual circumstances, like caregiving obligations, when designing their roles and evaluating their performance.

“That is a major departure from the time-honored definition of the employer-employee relationship.”

The booming post-COVID economy most experts think will eventually happen will not be a ”new normal,” but instead a constantly-changing series of “next normals.” Whether your small business adapts will determine whether your business will succeed in 2021.