The beginning of Donald Trump’s tenure as president has been met with controversy, but his campaign and recent actions have called attention to a vital part of the American Dream – small businesses. However, small business owners are not united on their perception of the 45th President.

But if approval is low and the outlook is optimistic, what are small business owners concentrating on? Despite the majority disapproving of his performance, the most important aspect of Trump’s presidency for small business owners is how it will impact their business and the economy as a whole. Votes were cast and the results are in.

Small business owners are unsure and split on how the Trump administration will affect their business: 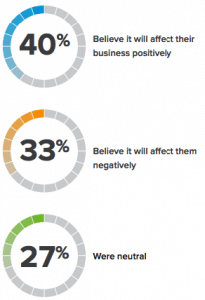 The economic outlook isn’t positive for small business owners, with 56 percent believing the economy will be the same or worse at the close of Trump’s first term, compared to 44 percent who think it will be better. The positive outlook increases significantly among Trump’s supporters:

Despite the majority having a negative economic outlook, small business owners are still optimistic about the state of their own business, with 62 percent planning to hire additional employees in the next six months However, there’s a split between those who supported Trump in the election and those who didn’t:

Trump’s most attractive qualities to small business owners were: 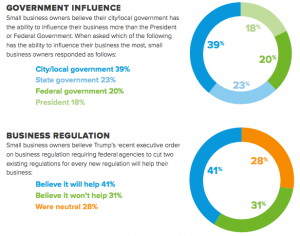 The January 2017 study collected responses via an online survey of more than 330 random small business owners located in the U.S. with 250 employees or less. This research was generated by Lendio in partnership with Qualtrics.