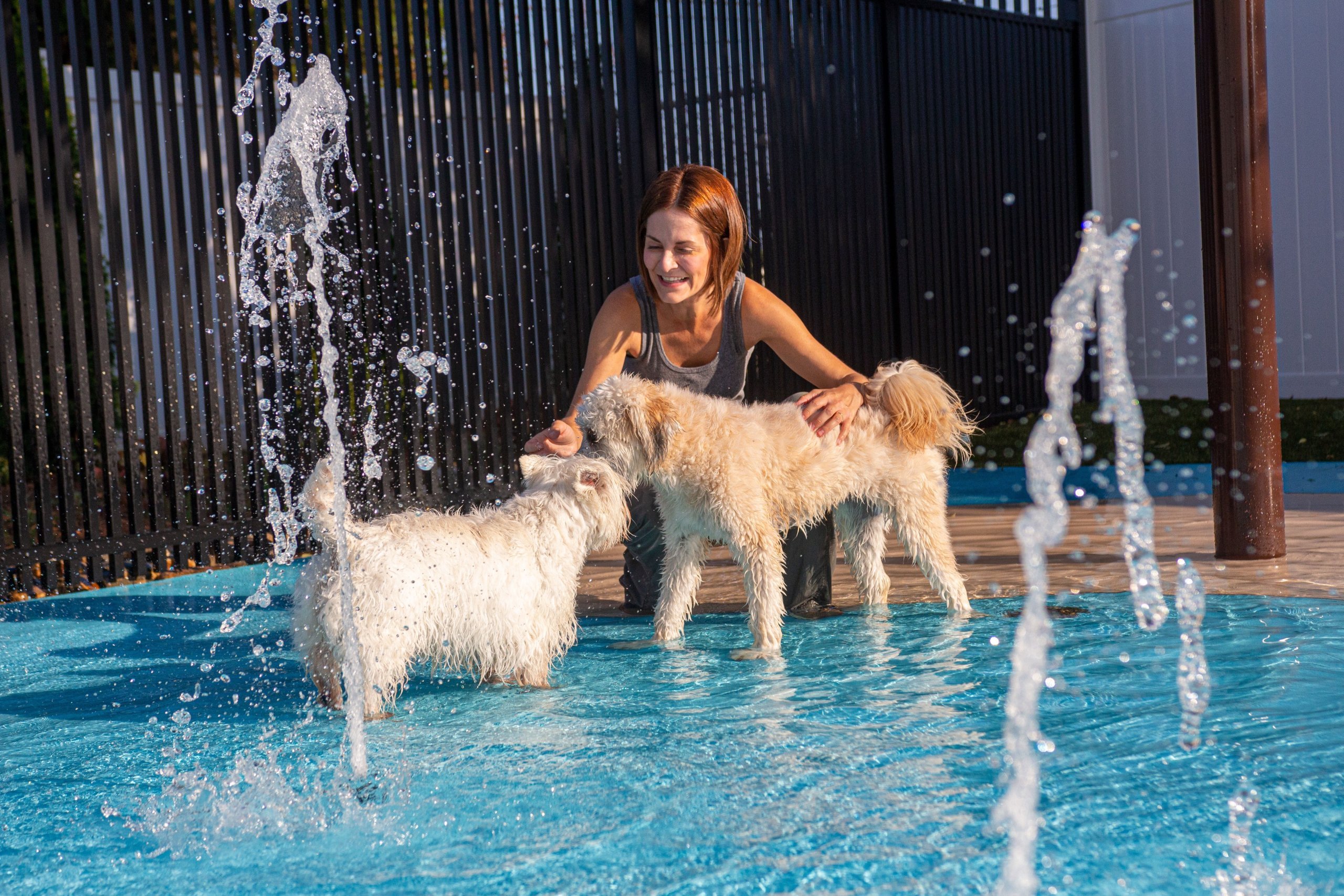 It’s no easy feat being a small business owner—a large majority don’t make it past year one. So, in 2019, when Kristen Hall Shirley celebrated the 10-year anniversary of her huge boarding facility and doggie daycare, Puptown Charlotte, she was ecstatic to hit a milestone rare for many entrepreneurs.

She celebrated by introducing a splash park and throwing a huge beach party, with a videographer, colorful leis, Jimmy Buffett music, delicious food, and of course, canine guests to enjoy the water fountain, waterfall, and play puddle.

It was an amazing feat for Kristen and things were looking sunny for Puptown Charlotte entering its 11th year.

But then COVID-19 hit this spring.

March would have been the beginning of Puptown Charlotte’s busy season, when clients travel for work, spring break, and Easter weekend. This year, things were different—much different.

“Puptown Charlotte experienced a landslide of boarding cancellations as news of COVID-19 began to spread,” says Kristen. “Then, as corporate employers started allowing employees to work from home, our daycare numbers started falling as well.”

By mid-March, business had dropped by more than 60% and suddenly there was only enough work to support three of Kristen’s 10 staff members. On March 26, Puptown Charlotte shut down for six weeks to comply with stay-at-home orders issued by the state of North Carolina.

“Although I felt crushed telling my employees I could no longer support them, I knew this decision was necessary to keep them physically safe, and to relieve a significant source of financial stress on Puptown Charlotte,” says Kristen.

Getting Creative to Keep Puptown Afloat

“I approached this surreal situation with the same strategy I use in all emergencies: I acknowledged the reality, I used available information to make a realistic plan, and then I implemented the plan as quickly as possible,” she says.

Kristen got scrappy. She asked her clients for support, and many came through, helping her not only cover rent for April but also donating supplies and other goods. She printed Puptown Charlotte t-shirts to pay the utility bills and also launched a dog jewelry line.

But it wasn’t enough.

Turning to PPP in Hopes of Bringing Puptown Back to Life

“Despite the incredible generosity of Puptown Charlotte’s clients, a sharp drop in sales followed by six weeks of zero revenue put us in a really difficult position,” says Kristen, who has large overhead expenses for the 10,000 square-foot facility.

The first day the SBA began accepting applications, Kristen applied at her bank.

“Despite my 19 years of loyalty, they said they were not ‘ready’ for me to submit a PPP application,” says Kristen, adding that other banks wouldn’t take her application either, as she didn’t have a relationship with them.

She pushed on, submitting her application multiple times, including the bank where she has a mortgage. She never received confirmation it was received.

“It was incredibly discouraging to be ignored and rejected while every day news headlines screamed that the $350 billion PPP funding was rapidly dwindling, says Kristen. “I jokingly say that stubbornness is my best quality, and in this situation it served me well because I was fighting for my business and my livelihood, and I simply refused to give up.”

“Lendio’s initial application took less than 10 minutes, the website worked without any glitches, and I received immediate confirmation that my application had been accepted,” she says, adding that Lendio matched her with a lender in four days. “After weeks of others ignoring me or telling me ‘no,’ it was a relief to find Lendio—a group of people that genuinely listened, understood, and actively helped with the challenges my business was facing.”

An Extra Boost from Lendio

In addition to receiving a PPP loan through the Lendio platform, Puptown also won a $10,000 Lendio Small Business Grant.

“Puptown Charlotte is just one of many small businesses fighting to survive the disruption and changes caused by COVID-19, and it was a tremendous honor to be recognized with one of Lendio’s $10,000 grants,” she says.

The loan along with the grant has given Kristen and her team a bit of a financial cushion to weather the COVID-19 storm. And while people continue to work from home, with their dogs by their sides, they understand the importance of Puptown Charlotte for their four-legged friends.

“Clients have realized that our daycare and splash park offer a type of fun and enrichment that dogs can only get at Puptown Charlotte, and our numbers have risen steadily for the past month,” she says. “We love what we do and we are so glad that Puptown Charlotte is once again filled with smiling people and wagging tails.”