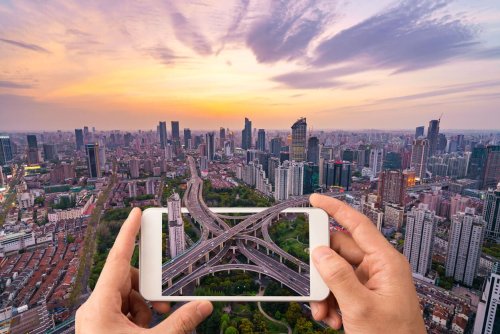 Sci-fi filmmakers and novelists have long imagined a digital future. The question is, will it look like The Matrix, where humans are plugged-in to a ridiculously life-like simulation against their wills, or Ready Player One, where thousands of people log on to an immersive online game to escape reality?

OK, both of those options are, admittedly, a little dark. Though we’ve been hurtling toward these 2 extremes for years—between computers, smartphones, and virtual reality—it wasn’t until a global pandemic that our lives turned digital all at once. Here’s what that could mean for the next phase of digital life.

A Digital World for All Starts With Financials

Many industries have been digital since the widespread adoption of the ‘net. Online banking first appeared in the late 1970s, and indeed, so have online regulations, with the Electronic Fund Transfer Act of 1978 “intended to protect individual consumers engaging in electronic fund transfers through automated teller machines, point-of-sale terminals, automated clearinghouse systems, and remote banking programs.”

It’s hard to believe, sitting around a restaurant table (remember those?) to divvy up the check via Venmo, that this was revolutionary. But it’s not that way for everyone. In some areas of the country and around the world, Wi-Fi is a scarce resource and digital platforms don’t exist to connect lenders and borrowers.

“To build inclusive societies and address inequalities during and after the ongoing crisis, global and national leaders must close the digital divide across and within countries to reap the benefits of digital financial services,” writes Ulric Eriksson von Allmen, assistant director in the IMF’s Monetary and Capital Markets Department. “Low-income households and small firms can benefit greatly from advances in mobile money, fintech services, and online banking.”

Online banking is just the beginning. E-commerce grew 129% year-over-year in the US and Canada in April, with 72% of consumers using mobile devices to do their online shopping. Shopify, a popular platform for e-commerce sellers, saw a 47% jump in sales to $470 million compared to Q1 2019. “The vast majority of people are employed by small businesses, and they struggle the most during a crisis,” CEO Tobias Lutke said in a press release. “The spread of COVID-19 is going to be a tough time for all entrepreneurs.”

While it has been tough, there’s never been a better time to embrace e-commerce. New stores on Shopify grew 62% between March 2020 and April 2020 compared to the prior 6 weeks, with an explosion of food, beverages, and tobacco products, which doubled during the same period.

The online experience is more and more crucial, as brick-and-mortar stores are still closed in many locations around the country. Building a frictionless website or using a built-in platform like Shopify or competitor BigCommerce will be the survival difference. What’s more, people expect to make the majority of their purchases digitally from now on, according to McKinsey. 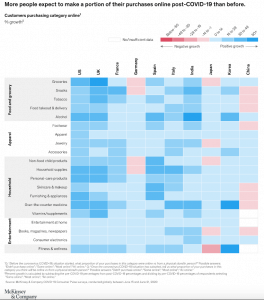 And this shift is still powered by humans. Online food delivery, for example, replaced typical restaurant revenue, with delivery services like Deliveroo, Postmates, and UberEats expanding into grocery service. DoorDash, now valued at $16 billion, seems to be winning. “For some restaurants, food delivery services were their only means of being in business,” Douglass Miller, a professor at Cornell University’s School of Hotel Administration, told CNBC. “The only other option was to physically close.”

No need when you can order whatever food, clothing, or services you’d like with the swipe of a finger.

Most healthy adults dread a visit to the doctor, but now they may not have to wait for hours on end to get medical care in cramped doctor’s offices. Telemedicine already existed as a $45 billion market in 2019, but it was a little-used benefit. Now, it’s projected to grow to $175 billion by 2026.

It’s becoming more popular—42% of people reported using a telehealth service since the beginning of the pandemic. “Telehealth will no longer be a plus or nice to have for practices—it will be a requirement to stay in business,” Michael Morgan, CEO of Updox, told Medical Economics. “Virtual care and contactless offices will transform the way healthcare is provided. The experience must be consistent whether the visit is virtual or in-office.”

And what about regular old self-care? While a spa visit may not seem as pressing as a doctor’s appointment, a DIY-driven movement is growing. Google searches for “self care,” “covid self care,” and “self care during quarantine” spiked dramatically starting in April, peaking around April 18. DIY spa nights are having a moment, including at-home haircuts—though the second isn’t so easy. Take it from one Guardian reader: “What could go wrong? I lost focus for a millisecond, and in this moment I left what can only be described as a crater at the top of my head.”

Digital is Here to Stay

Despite what you might read about the nation reopening, digital is here to stay. Based on media coverage, you might think that everyone is renting an RV and hitting the nearest National Park, but visitation numbers are down even at Yellowstone, historically the most popular park in the system.

The list goes on of the different areas of life impacted by shifting to digital: remote learning, ghost factories, and more. Even in areas that are reopening, more than 70% of people don’t yet feel comfortable resuming their “normal” lives. It won’t be until a vaccine, treatment, and stronger government response that the US will see a resurgence of life IRL.