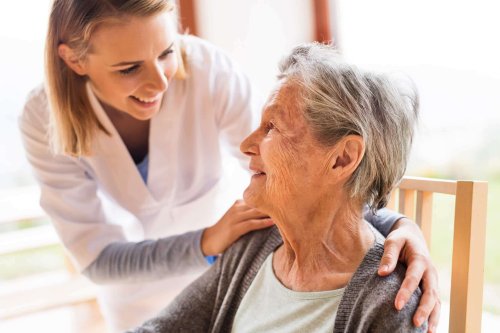 But at some point in life, getting older starts to hinder your independence. The harsh realities of aging bring poor eyesight, memory loss, or constant fatigue. Over time, seniors find it harder and harder to accomplish daily activities like making the bed, doing the dishes, or driving a car. Social isolation can set in as family members move away, and loneliness looms like a dark cloud.

For Beverly Glazer of Sacramento, California, helping to lift that cloud became the driving force for owning her own business. As Beverly reached the later stages of her career as a senior caregiver, she began to dream about running her own homecare business. She wanted to pass on her knowledge and experience as a homecare professional to a younger generation of caregivers. She reached out to Dale, her brother and a successful entrepreneur, for help. Together they opened a Visiting Angels franchise, a companion-level home care service for senior citizens.

“My sister, Beverly, was a daily caregiver for over 20 years,” says Dale, General Manager of Visiting Angels in midtown Sacramento. “She had the kindest heart of anyone you could ever meet.”

Things started off well for the brother and sister franchisees. For the first few months, the business thrived. But Beverly started feeling sick and, unfortunately, she only got sicker as the weeks passed. Beverly was diagnosed with stage four kidney cancer and passed away just a few months after the franchise opened. Dale promised his sister he would keep up the work they had started and do everything he could to help the business flourish.

The loss of his sister was incredibly hard to bear, but Dale threw himself into running the business. As the franchise grew, gaps between invoice payments from insurance companies became a major cash flow obstacle. Dale needed a loan to bridge the gap and make payroll.

After being denied a loan by several traditional lenders, Dale stumbled upon Lendio. “I was waiting for the classic bait and switch, but it never happened,” he said. “In fact, the rate and terms improved as the process unfolded. It was professional, and I was funded in four days! Why can’t traditional lenders, local or large banks fund business loans the same way?”

With working capital in hand, Dale has been able to push forward and grow his sister’s franchise. “The work these caregivers are doing on a daily basis is lifesaving. They don’t work in a hospital. They don’t administer medicine or medical treatment of any kind. They provide companionship by giving car rides, doing the dishes, making the bed, or just simply talking for hours,” says Dale. “It’s all about helping people who need it, empowering them, and bringing them happiness. I’m happy to be able to honor my sister’s memory by helping her dreams grow into reality.”