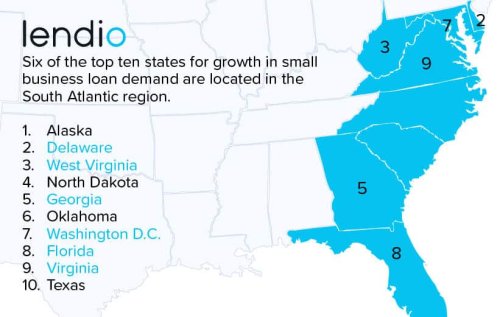 According to a recent Lendio report, demand for business loans in the South Atlantic region grew more than any other region in the country during Q3 2019. For four consecutive quarters, the region has ranked No. 1 in the country for the number of loan inquiries submitted, loans funded, and the total dollar amount borrowed.

The region’s small businesses have proven successful in acquiring financing as well as showing consistent growth. However, South Atlantic businesses still face challenges, particularly when it comes to their credit scores.

Growth in All Lending Metrics

These rankings bode well for small business owners in the region who are looking to grow or expand. The South Atlantic is one of only three regions in the nation to see growth in the average loan amount during Q3. Business owners in the region also demonstrated overall growth, as they reported the second-largest increase in average annual revenue and third-largest increase in average personal income.

Despite high levels of growth in the aforementioned areas, credit scores are among the lowest in the nation. Business owners would do well to regularly check and work to build their business credit.

When it comes to funding younger business owners, the region fell behind in Q3. The South Atlantic had the lowest percentage of borrowers under age 34 in Q3, a 7% decrease from the previous three-quarter average. This is one area in which the region has ground to make up. A report recently indicated that the number of borrowers under 34 increased in 22 states nationwide, but only 2 of those states are in the South Atlantic region.

Despite hills and valleys in some areas of small business financial health in the region, the South Atlantic proves to be one of the most stable environments for small businesses in the nation. The region’s increase in loan inquiries, loans funded, and total dollars funded for four quarters straight is an impressive feat, and this should give a boost of confidence to small business owners that growth capital is well within reach.