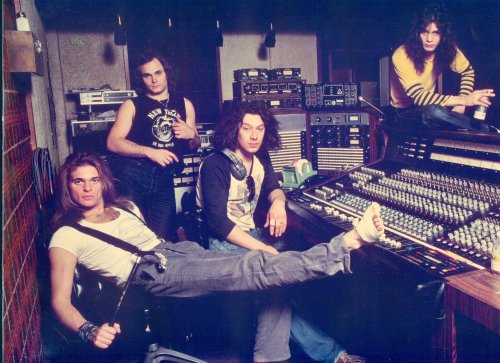 How a PPP Loan Is Keeping a Famed Recording Studio Rocking

Music recording studio Sunset Sound is a bit of a legend in Los Angeles. Around for the past 60 years, the family-run business has had hundreds, if not thousands, of famous musicians record at its studio. From classic rock groups, like The Doors, Led Zeppelin and Van Halen to today’s pop artists, including Lady Gaga, TK and TK, have all walked through Sunset Sound Recorders’ doors.

But despite its notable status and longevity, Sunset Sound wasn’t immune to COVID-19’s devastating impact on businesses.

“It was a blow to us,” says Paul Camarata, president of the company. “In the history of the company, we have never had to shut down.”

Forced to put a halt on all recording sessions, Sunset Sound had to think quickly in order to survive.

The Day the Music Died

It was a Thursday. “We knew there was a virus, and then we got word from the city on March 19 at around 5 pm, saying all businesses need to shut down tomorrow,” Paul recalls. Scrambling to ensure the current band sessions could finish up that evening (one worked through the entire night before jumping on a plane to Sweden before the airports shut down), Paul had to close down Sunset Sound within 24 hours. The team had to cancel all future bookings indefinitely and furlough employees.

Despite no revenue coming in, the bills didn’t stop. “It was very frustrating and depressing, because it was unclear when the business would come back,” says Paul. He had to think quickly.

The PPP Strikes a Chord With the Studio

Paul heard about the Payment Protection Plan, or PPP,  and immediately applied for it through his bank, Wells Fargo, in hopes he could hire back his employees to get Sunset Sound prepared to reopen.

“I applied, and I waited and waited and waited,” he says of the process. “I tried to talk to my contacts there, and they said they couldn’t help out,” he says. “This went on for two weeks, and I got absolutely nowhere.”

Worried that the PPP money was going to run out, Paul turned to Lendio.

“I think they had the application to me the next day,” he says. “I filled it out and heard back from them immediately, saying that they received my application and within three days I had an approval. It was unbelievable in a marvelous way.”

Now with money in hand, Paul could begin the process of reopening Sunset Sound.

Singing a New Tune These Days

With PPP money in hand, Sunset Sound could begin opening up its doors —  but there were hurdles. The studio was completely shut down for about two months, meaning all the equipment was turned off, too.

“It’s not like you can turn it back on and everything works right,” says Paul. “I had to bring the whole crew back in and get the studios back up and running, which took weeks. There was a lot of failed equipment and problems. We just finished that in the last week and used the PPP funds to pay their salaries. I actually don’t know what we would do without the PPP funds.”

With bands now starting to come in for recording sessions, Sunset Sound checks everyone’s temperatures, asks people to wear masks, cleans doorknobs and surfaces on a regular basis and ensures there are no large groups.

“For our sessions, there usually is somewhere between five and 10 people, so it is fairly easy to social distance, though, I don’t think we would be doing a choir right now,” says Paul.

While summer tends to be a slower season for Sunset Sound with artists usually on tour, this year may be different as live performances will likely not resume anytime soon.

“Right now, musicians really can’t do anything now except record,” says Paul. “We are hoping that once artists are ready and feeling comfortable, they will be in the studio recording.”