How a Homemade Pudding Became the Recipe for a Successful Business

Michael Sanders’ mom was southern and always made the best banana pudding. After her passing, Michael longed for something to remind him of his mother. When Michael’s wife, Kendra, offered to make her own version of his mother’s signature dessert, Michael was skeptical. Kendra was from the northeast where pudding wasn’t a big part of her upbringing.

When Kendra came out of the kitchen with a heavenly pudding that was like a combination of soft serve ice cream, sweet cake batter, silky frosting, and creamy cheesecake, Michael was “totally flabbergasted.” In that moment, the dream for Pudding on Smiles was born. 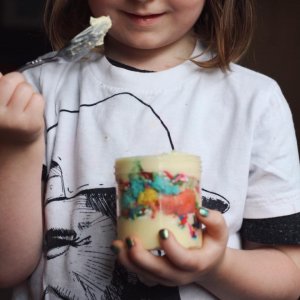 But it wasn’t all smooth sailing from there. Kendra started an online bakery in 2010. Four years later, in 2014, Kendra and Michael welcomed their fourth child. Their baby girl was delivered at 24 weeks and weighed only 11 ounces. The prognosis for their daughter was not good, and there was a lot of uncertainty over what her quality of life may be like if she did survive; thus Michael and Kendra put the business on hold and focused all their energy on their family.

After a year in the hospital, their daughter was released and the family found themselves at a crossroads. Should they reopen their online bakery? Should Michael go back to his job working 90-hour weeks? With their newfound perspective they decided to create a family business that would allow them to spend as much time together as they could and create a legacy for their children.

They began their mom-and-pop pudding business with around $400 of their own cash. Starting small, selling at local farmers markets, they gradually began adding retail locations at malls. Pudding on Smiles made its way into 15 grocery stores, and appeared at Texas Motor Speedway and Taste of Dallas.

Michael and Kendra were still paying hospital bills and their credit was less-than-desirable. Their financial history was not an accurate reflection of their company or the people they are today. Eager to grow their business and meet the demands that were coming, Michael and Kendra came to Lendio looking for a loan to purchase equipment for their production facility. “Our funding manager worked so hard for us. He was amazing as he handled the overall situation and coached us through the process,” says Michael.

With working capital in hand from an American Express Merchant loan, Michael and Kendra are expanding into Central Market stores all over Texas, and negotiating other expansion opportunities. “We didn’t seek out opportunities because we didn’t have the production capacity. Getting funding in place has helped us to really start expanding our business. We hope to have a larger national and potentially global brand in the near future,” shares Michael.

With customers now clamoring for their pudding and over 50 flavor combinations including caramel apple, gingerbread, chocolate mint, and eggnog, Michael and Kendra’s perseverance is paying off. “It’s never logical; you act on what your gut feels and what your spirit says,” says Michael. “People are amazed at our success, but it was not overnight. It was many sleepless nights. We just kept swimming and finally the light appeared at the end of the tunnel.”

Texas recently ranked No. 5 on Lendio’s 2018 Top 10 Best States for Small Business Lending. Read more about why the Lone Star State is such a thriving hub for small business.

Brandy worked in social media, publishing, and technical writing before joining the Lendio News team. She has a B.S. in Communications from the University of Utah. When she's not writing, Brandy enjoys cooking and traveling.