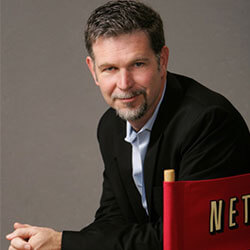 How Netflix Became A Household Name Recently my friend posted a meme on Facebook stating, “Netflix: Gives you 15 seconds between episodes to decide if you’re doing anything with your life today.” It’s a running joke with college students that Netflix has ruined their GPA. It’s no joke that Netflix is making serious money even after a couple of speed bumps the last couple of years.

Netflix has revolutionized the movie industry. In an interview with Fortune, Reed Hastings, founder and CEO of Netflix, tells how it got started. He says the catalyst for it was because of a $40 late fee for a VHS copy of Apollo 13.  Even though VHS tapes were still king, DVD’s were gaining footing fast. Hastings knew he had a great idea for a movie-rental by mail business and ran out to a record company to buy a CD. He mailed just the disc to his home in an envelope to test out if you could send a disc by mail. The disc was in great condition and thus Netflix was born.

Here are four takeaways from Netflix’s journey to becoming a household name:

Find a solution to a problem

Every successful company usually starts with a product or service that solves a problem. Hastings however didn’t run around searching for a problem to solve. The problem landed in his lap. By starting Netflix he arguably solved the problem of getting the rental back to the store on time. You could now just put it in your mailbox.

The other problem they had to solve was getting rid of late fees. I mean, who doesn’t hate late fees? Netflix really took off when they changed up their subscription model and went from the typical pay-per-video to the pay-per-month. This got rid of the stress of returning something on time. If you want to keep a video the whole month, do it. If you forget to send it back after watching, no problem. If you didn’t like the movie, send it back and your next movie will be on its way.

Don’t put a glass ceiling over yourself

The name of your company is important especially if you are in the services industry.  You want people to know what you do but you don’t want to limit yourself to what you can do. For example, when Hastings started Netflix people wondered why he didn’t just call it “DVDS by Mail.” He knew that Netflix could be profitable with a tangible product and knew there was a future in online streaming.

On-demand online streaming has taken off. Netflix now has several competitors that offer the similar service. Amazon Prime, Hulu, HBO, and even some television companies have hopped on the online streaming train. Even some of their direct competitors have tried replicating what Netflix has done.

Your competition can be hot on your tail and you don’t know it.

Blockbuster, founded in 1985, probably didn’t think much of Netflix when it started in 1997. Netflix had a great product and it was taking customers away from Blockbuster.  In 2004 Blockbuster created an online program to compete with Netflix. Hastings shrugged it off thinking, “…well, they won’t put much money behind it.” Blockbuster ended up investing millions into building up and marketing their new online service called Blockbuster Now.

What doesn’t kill you makes you stronger

Everything hasn’t been all daisies and rainbows for Netflix. Back in 2011 they made the move to make more money by charging $7.99 for their online streaming service and a separate $7.99 for their DVD by mail service. These services were originally bundled together for $9.99.  They also planned to change the disc-by-mail service to the company name of Qwikster.

Customers voiced their opinion by word-of-mouth and quickly stopped Netflix from becoming Qwikster. However, it didn’t stop the pricing change. Around this same time Netflix lost its contract with Starz, which had a good collection of popular movies and television shows to choose from. Making this changed caused them to lose 800,000 subscribers in the third quarter of 2011.

Since then Netflix has slowly improved their services to include more television shows and movies on their online streaming service. They have more followers than ever and are even breaking into having “Netflix original series”. The Netflix original series truly takes Netflix to the next level to compete with other TV services like HBO and Starz.

Starting your company can be scary. If you are starting a revolution through the innovation you created product or service that means you are stepping into a “Blue Ocean Market” that could soon get turn into a “Red Ocean.” Charles Darwin said it best when he said, ““It is not the strongest of the species that survives, nor the most intelligent, but the one most responsive to change.” This applies to old companies and new companies alike.