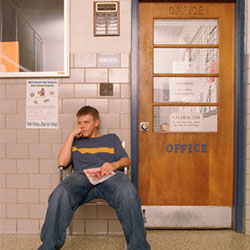 The Conspiracy of Help

Dean sat across the table waiting for an answer.  His question – asking the client transfer millions of dollars of assets to his firm – was one that, years earlier, he couldn’t have imagined asking.  In fact, the well-appointed, richly decorated room in which he was asking the question was worlds away from where he had begun – a southern rural mill town – with no mills left and Poverty now the mayor.

He remembered clearly the day he sauntered down the halls of his high school still laughing at the practical joke he had just pulled – one with which he thought he had gotten away.   Before that day, he didn’t think he really stood out at anything – academics, sports, school participation.  He was wrong about one thing.  The teachers, the administrators, the coaches, the councilors – they all new about Dean’s home life  – or lack thereof.  It showed up at school.  That stood out.

Dean suddenly felt a jerk on his collar so hard it arrested his forward motion.  A second quick motion and he was being pulled in a different direction, down a hall toward administration.  A minute later he was seated before of his guidance councilor’s desk as the man himself walked around his desk and took his own seat.

“What are you doing?” came the sharp rebuke.

“It was just a joke,” Dean answered.

“NOT what I’m talking about.  It’s just part of it.  You’re heading down the wrong path.  Do you know how easy it would be for the people of this town to say ‘Oh, that poor Dean. He never had a chance, did he?  His parents being alcoholics – his rotten home life.’  But they’re not.  They want you to succeed.  They’re rooting for you.  They want you to rise up and be bigger than this town and your lousy situation.

Everyone that knows you thinks you’re basically a good kid in a bad situation and that, if you applied yourself, you’d make it out of here and make something of yourself.  There’s this conspiracy of help – of hope – and the people of this town want to help you make it.”

Dean sat quietly in his chair as the sermon fell on his ears.  His life philosophy morphing  almost instantly from cynicism and paranoia to optimism and gratitude.  He chose to believe his counselor.  He chose to believe that, if he showed promise and backed it up with hard work, his “cheering section” would come to his aid.

He was graduated from high school.  He went on to a prestigious college using grants, scholarships, contributions, and money he earned working concurrently.

He continued through law school and earned his law degree.

He continued on and earned a Master’s degree in taxation.

He became an expert in sales.

He became top ranked in his field.  Someone that was noticed.  Someone who could sell at the highest levels of any organization.  Someone that could confidently sit down with some of the most successful people and families in America and have them put their trust in him because he was trustWORTHY.

In sales, it’s easy to begin believing that people don’t want you to succeed.  That all your sales manager wants to do is ride you.  That none of your prospects are willing buyers.  That you have the “worst” territory in the company.  That one more call won’t make a difference.

It’s harder to believe in the conspiracy of help – that people want you to succeed and will assist you in any way that they can.  But when we do believe,  it radiates out and people want to be a part of what we do.  It becomes a self-fulfilling prophecy.