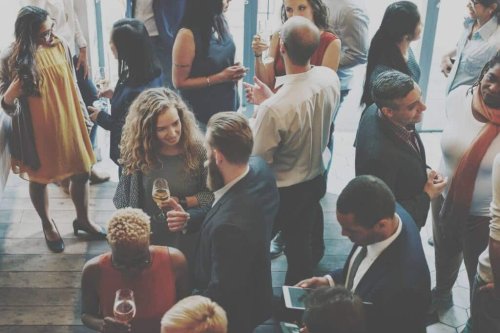 Whether it’s help on a project, access to investors, or finding the right mind to help you develop creative solutions to problems, networking poses the idea that the right people can get you anywhere in life. Great, so it must be time to hop online and sign up for a networking event, right? Well… maybe not.

“Most of us, when put into a situation where the only goal is to meet new people, default to staying inside of our comfort zones. That means talking to people we know… or at the very least people who are similar to us. That means most networking events are doomed from the start, by their very design,” said David Birkus, Associate Professor of Leadership and Innovation at Oral Roberts University, in an article for the Harvard Business Review.

A study was done on this very phenomenon by Columbia Business Professors Paul Ingram and Michael Morris. In their study they threw a networking mixer for 100 executives, consultants, entrepreneurs, and bankers in an MBA program. These guests were tracked with special badges that monitored who they talked to. The average person spent most of their time with people they already knew and, when they did meet new people, they were usually already in a similar field.

So networking events can be a huge waste of time – but they don’t have to be. According to possibly the best networker in the world, Rich Stromback, “Nobody wants to have a ‘networking conversation,’ especially those who are at the highest levels of business and politics. They are hungry for real conversations and real relationships. It just has to be authentic, genuine, and sincere. I don’t look at people’s badges to decide if they are worth my time.”

Stromback also suggests a different approach to first impressions: “Everyone gets this wrong. They try to look right and sound right and end up being completely forgettable. I’m having a ball just being myself. I don’t wear suits or anything like that. I do not care about first impressions. I’d almost rather make a bad first impression and let people discover me over time than go for an immediate positive response.”

Thus, the best answer for someone interested in networking is to just be themselves. Meet people informally, be friendly, and try not to be too single-minded with regards to finding people who can directly benefit your business. You might be surprised at the kind of people you’ll meet.