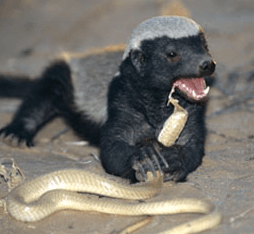 The Honey Badger is the most fearless animal in the animal kingdom.  It just takes what it wants.

As I noticed this penchant for getting what he wanted I started paying attention to what he was doing to achieve this feat.  In our office, and I’m sure in offices around the country, we’ve taken to calling the act of doing what you want “honeybadgering” after the famous YouTube video I hyperlinked to in the lead paragraph of this blog entry.  This individual is an expert at “honeybadgering.”

In one instance while doing a series of interviews at a number of local media outlets, this individual wanted to talk to a specific reporter at one of the local TV stations.  I told him we could probably set something up but as we were on site and hadn’t reached out to this reporter in advance to coordinate an interview it might be difficult to secure something right then and there simply because we were on site.

The reporter didn’t interview him on the spot but did express his interest in the event and set up a time for him to follow up to schedule and interview.

With this experience in mind and after watching this client get what he wanted time after time, I noticed some common threads in what he was doing.  I’ve listed these principles below.  I believe that by practicing these tips you to can become a honey badger and get what you want.  I know it’s made a difference in my efforts, specifically as it relates to working with the media to get what I want.

I was always amazed at the boldness of my client to just come right out and ask for some of the things he asked for.  He always seemed to get what he wanted though. To him it was natural, he didn’t even have to think about it, he just did it.  For me, I tend to be a little more reserved.  Because of this, thee are times I regret not speaking up and feel like I may have missed an opportunity.