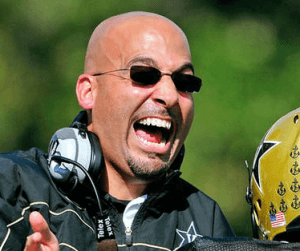 Would You Jump Off A Cliff For Your Team? Vanderbilt head coach James Franklin did just that. They just finished their most successful season in 97 years, but that’s not the achievement I’m most impressed with:

Clay Travis, writing for FOX Sports asks, “How does Vanderbilt follow up on a nine-win campaign, its most successful football season in 97 years?”

“Well, part of the plan gets developed by Vanderbilt’s coaching staff on their annual football coaches retreat,” he writes. “The Vandy staff works on football from 8 in the morning until 1 in the afternoon and then spends the rest of the day and evening having fun. Working hard and playing hard is why coach James Franklin believes Vandy was the only staff in the SEC that didn’t lose a single coach last year. Last year’s retreat was in Birmingham, this year’s is in Chattanooga.”

Maybe we should repeat part of that: “Working hard and playing hard is why coach James Franklin believes Vandy was the only staff in the SEC that didn’t lose a single coach last year.”

What’s more, I don’t think it’s having fun on an off-season retreat that keeps the coaching staff together. As a leader you can fake that. I’d guess that Coach Franklin has created an environment where the team enjoys working with each other, is jazzed about what they’re doing, and feels like they’re making a difference—having fun together at a retreat is evidence that they enjoy spending time together the rest of the year.

During this year’s outing some of the coaching staff opted to play golf at the Chattanooga Country Club and the other half spent the day on a pontoon boat in the Chickamunga Lake—which is where Coach Franklin jumped off the cliff for the team.

There’s no doubt in my mind that culture is an important part of any successful organization. Granted, there are toxic cultures that see success, but I don’t know of many organizations that can claim an employee churn of zero. That, along with the best season in 97 years, speaks to a good culture. Well done Coach Franklin.

Creating a productive culture where people can perform at their best, and enjoy doing it, doesn’t just happen—you’ve got to put your money where your mouth is. And it’s a lot more than a yearly retreat for the executive team. It’s about creating an environment where performance counts and counting the minutes butts are in seats doesn’t. It’s about a work environment where the Ping Pong or pool table in the break-room actually sees some action during the day instead of collecting dust until the next group of investors show up or the next job candidate arrives for an interview.

Several years ago while working as Creative Director in a small ad agency, it wasn’t uncommon for the Agency President to gather the team in the conference room to play a quick game of War with a deck of cards or walk across the street to share an ice cream cone. There have been other companies where I felt chained to the desk and felt guilty for the time I spent at lunch or in the restroom. The work environment makes a difference to me. And, along with a vision I can get behind and feeling empowered to make a difference, the culture is a big reason I’m now at Lendio.

We have fun together, but when it’s time to work we work hard. I enjoy the time I spend with my colleagues—my peers, my team, along with our company executives. It’s rare to find the type of environment it sounds like Coach Franklin has created. It’s obviously a priority to him and likely trickles down to how the coaching staff interacts with the team and likely inspires them to perform at their best.

I can’t wait to see if Vanderbilt continues to build upon their winning streak. I’ll certainly be watching.