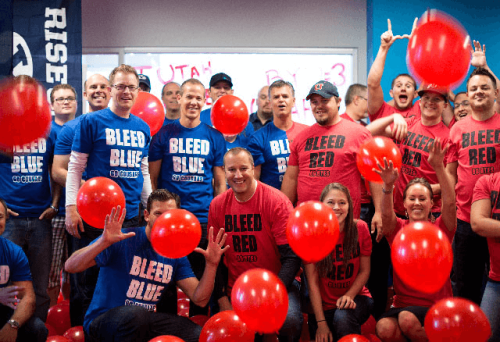 Lendio Hosts BYU vs. Utah Battle of the Fans for Hurricane Harvey Relief

At Lendio, competition is our lifestyle. We’re not afraid to compete in the marketplace and actually look forward to the challenges of competition. As our CEO Brock Blake would say, “we’re in it to win.”

While we channel that moxie into fueling the American dream for small business owners every day, we love to have a little good-spirited, competitive fun around the office and in the community. If we can raise a little money for a good cause while doing it—even better.

A long-standing Utah tradition, Rivalry Week brings out the most die-hard Brigham Young University and University of Utah fans in the area to pledge their allegiance to their favorite team. The Cougars and Utes go head-to-head on the turf September 9 at Lavell Edwards Stadium in Provo, Utah, and the competition has already been heating up, especially here at Lendio.

This year, Rivalry Week is not just a chance for Lendio employees to get in a few friendly jabs and pull some serious pranks (check out what happened in 2009, 2011, and 2013), but a chance to raise money for some of our small business customers that were affected by Hurricane Harvey. Our hearts go out to the residents of the affected areas, especially the small business owners whose businesses and livelihoods are threatened by the devastating flood waters.

In the spirit of good-natured competition and giving back, Lendio is hosting a Battle of the Fans at our South Jordan, Utah, office Friday. We’ll collect monetary donations for Harvey relief, while having a “car smashing” good time competing for charity. BYU and Utah fans who donate can be taken up 170 feet in the air by the folks at Mountain Crane, have a chance to smash the rival team’s car, and watch the losing team’s car as it’s dropped from the crane.

Go here to donate to Lendio’s Hurricane Harvey relief effort, and may the best team win!