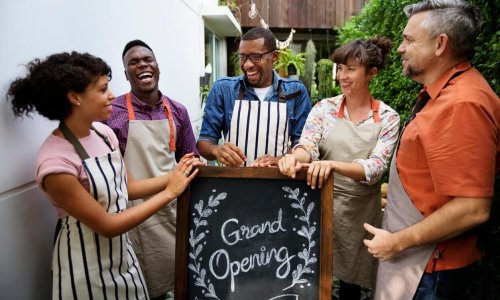 We’re currently living in the longest period of sustained economic growth in US history, but it can’t last forever. There isn’t a surefire way to predict when the next recession will come, so instead, we’ve turned our attention to the states where small businesses are best prepared to weather the storm when it hits.

What Prepares a Small Business for Recession?

Small businesses can be hit the hardest by a recession. They often don’t have money in reserves to “wait it out,” and lenders grow more cautious with funding decisions. Revenue, time in business, and credit score—always key factors in qualifying for a small business loan—become even more important during a recession. Having previous business loans may help small business owners come recession time, too, as it demonstrates a history of loan repayment—aka that a lender can trust your small business not to dine-and-dash with a loan.

Societal issues also play a part. States with higher unemployment and volatility in state budgets may be more susceptible to the negative effects of a recession. To determine which states are the most prepared for our next recession, we analyzed Lendio data from over 8,500 small business borrowers and ranked for time-in-business, average annual revenue, credit score, and average loan amount that businesses have qualified for in the past year and combined that with unemployment data from the US Bureau of Labor Statistics and the Pew Charitable Trust’s measure of state budget volatility (based on the amount of money a state takes in from year to year).

According to the US Small Business Administration (SBA), 46.7% of private workforce employees in the state of Nebraska work for small businesses. In 2015, the largest sectors for small business employment were “health care and social assistance” and “accommodation and food services,” followed by retail and construction. Nebraska ranks 9th in the country for the average loan amount small business owners have been able to secure ($18,578). Combine its funding history with its low unemployment rate and low volatility rating, and Nebraska has earned the #10 spot for states most prepared for the next recession.

The state came in lower on the list because of its lower scores for small business annual revenues, credit scores, and time in business. This may be due to the concentration of sole proprietors in the state. Non-employer small businesses make up the largest portion of small businesses with 131,519 such businesses.

Small businesses account for 97% of Connecticut businesses and employ 49% of employees, according to the SBA’s Small Business Economic Profile. Like Nebraska, “health care and social assistance” and “accommodation and food services” were the 2 largest industries for small business employment. In Connecticut, manufacturing, retail, and “professional, technical, and scientific services” ranked in the top 5 sectors. These specialized factors may be responsible for the state’s high marks for time in business, credit score, and annual revenue, all of which factor into its 4th place ranking for the largest average loan ($21,517).

It didn’t fare as well when it came to state budget volatility or unemployment rate, which were both high. Startups are contributing to volatility in the state. In the second quarter of 2014, startups created 7,810 new jobs. In the same timeframe, they were responsible for 5,786 job losses. Many startups depend on funding raised every 18 months in order to survive. Once a recession hits, that funding will be more difficult to acquire, spelling trouble for the more than 19,200 Connecticut startups created in the first half of 2019.

All but 0.5% of businesses in Maryland are small businesses, according to the SBA, employing 50.2% of the private workforce in 2015. The state has had slower growth than the national average, with growth at an annual rate of 2.6% in the 3rd quarter of 2017 (compared to the national growth rate of 3.4%). But the state makes up for it with the 3rd lowest state-budget volatility rating in the country, making it the state embodiment of “slow and steady wins the race.”

Maryland has one of the lowest statewide averages for funded small business credit scores, but they make up for it with an average 9 years and 4 months in business, meaning that the average Maryland small business was started shortly after the start of the Great Recession (so they’ve got some practice with surviving the trials of a recession).

Like Maryland, over 99% of businesses in the Hawkeye State are small businesses, employing 646,525 people (48.3%) in the private workforce. The state has 4 times as many non-employer firms as it does small businesses that employ between 1 and 20 people, which may play a role in the state’s lower rankings for average annual revenue and time in business. Yet, the entrepreneurs who strike out on their own in Iowa have stronger credit scores, with a statewide average credit score of 668, which has helped them secure an average loan of $13,662.

The state is poised to fare well during a recession thanks to its low unemployment numbers and low volatility in the state budget. In 2018, the state budget closed with a $127 million surplus, putting the state in a good starting position to continue to perform necessary services even in the face of economic hardship.

Utah stood out for its ability to navigate growth through the perilous economic times of the Great Recession. Since past performance is a strong indicator of future performance, Utah has demonstrated that they know how to weather a recession, setting them up for success come the next economic downturn. The state has the 5th highest statewide average credit score for funded small businesses, and the 6th highest average loan size ($20,268).

Since the Great Recession, growth has continued. The state is going through a building boom, and it has the 2nd fastest-growing tech sector in the country. The SBA reported that Utah created 29,956 net jobs in 2015, with the largest gains coming from companies with 20 or fewer employees, contributing to the state’s low unemployment rate.

In case of a recession, Utah small business owners may want to watch the high volatility in the state budget. According to the 2017 Revenue Volatility Report, the state’s rainy day funds have been stagnant since 2011. While the state managed to repay $111 million of the $113 million borrowed from the rainy day fund after the Great Recession, $79 million of the $97 million borrowed between 2009-2011 still needs to be repaid.

Minnesota small businesses are killing it when it comes to their average annual revenue, credit scores, and time in business. Yet, it’s worth noting that while Minnesota performs well on these metrics compared to other states, entrepreneurship within the state has been on the decline since 1977. The startup rate of businesses has dropped over that same period (from 16% to 8%), while the closing rate of businesses has remained relatively steady, hovering around 8%. Large businesses, on the other hand, have taken the lion’s share of employment growth during economic recoveries.

Still, small businesses are responsible for 47.8% of private-sector employment in the state, totaling 1.2 million employees. The biggest industries in the state for companies with 1–20 employees are construction and “professional, scientific, and technical services.”

Small business is big business in Massachusetts, where the average annual revenue for business borrowers is just over $1 million, the second-highest in the nation. Small businesses employ more than 1.5 million people, 46.1% of private-sector employees. With an average of 8 years and 1 month in business, small business owners have proved they have the staying power for good times and bad.

The state endured the Great Recession better than most thanks to its higher education, technology, and health care sectors. “Professional, scientific, and technical services” is the largest industry for small businesses in the state, with a total of 98,300 non-employer firms and 17,805 small businesses with between 1 and 20 employees. Unemployment in the state is low because of the state’s steady job creation.

Hawaii took 3rd place for the states with the highest annual revenues. Business borrowers took in an average of $995,854 in the state and took out an average business loan of $16,061. Small business owners have good credit with an average credit score of 668 and an average of 8 years and 1 month in business.

As a state that is heavily reliant on tourism, Hawaii is susceptible to the negative effects of an economic downturn. During the Great Recession, vacation cancellations hit the state hard. But given the strong financial standing small businesses in the state have today, they should be able to weather a less severe recession more easily.

Small business owners in Alabama are 2nd-most prepared for the next recession. Small businesses in the state have strong revenues, credit, scores, and time in business. The state has neither the highest highs nor the lowest lows. Unemployment rates and state budget volatility were higher than some states on this list but high enough to maintain its overall ranking.

With a current rainy day fund of $627 million, Alabama has the cash available to weather a mild recession and most average recessions, according to George Mason University. The state wouldn’t be able to cover the high end of an average recession, which would require $719 million in capital.

Small businesses in the state are responsible for employing 50.5% of New Hampshire’s private sector employees. In 2015, small businesses created 6,747 net jobs. Small business owners in the state have some of the highest credit scores (average of 677) and longest time in business (average 9 years 10 months) in the country, along with their strong revenues—bolstering their lending history with solid standing on the 3 biggest factors lenders take into consideration.

Unemployment and state budget volatility in New Hampshire are also low. Its rainy day fund? Why, it’s ranked 6th best in the nation. The state currently has $83 million in reserves, $3 million more than it would need to cover the top end of a severe recession, putting New Hampshire small business owners in the best shape—if and when the economy takes a turn for the worst.