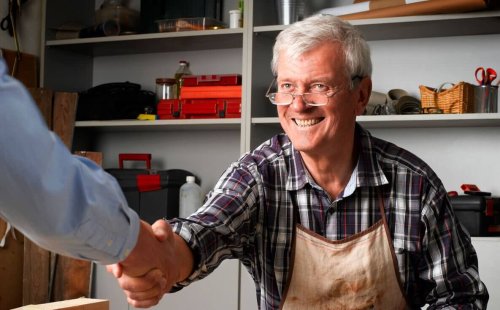 You know how this story starts: Back in 2008, the market tumble disproportionately affected older workers. With short time horizons before long-planned career transitions, they couldn’t ride out the rebound the way younger workers did. Ever since, the news has been filled with dire stories of delayed retirements, dashed dreams, and advice for how to recoup the losses.

You might not be as familiar with the quieter trend developing over the same time period. According to research gathered by the Small Business Administration, the number of new entrepreneurs ages 55-64 has increased from 15% to 25% since 1996. At the same time, researchers observed the highest self-employment rate among people age 65 and older.

Out of necessity? As a way to gain greater self-determination? To extend earning beyond the typical retirement threshold? It’s anyone’s guess. What’s clear is that self-employment has its benefits.

Recently, the Harvard Business Review reported the findings of a study about the health and economic well-being of nearly 3,000 British workers ages 50-67 over a period of 9 years. Those who left full-time careers and started their own companies during the study period lost income at the same time they gained an uptick in quality of life.

Researchers suspect that the older entrepreneurs focused more on their immediate circumstances than their younger counterparts did. Surprisingly, 44% of the study participants worked at least the same number of hours as employees and after becoming self-employed. This might be because they’re focusing on projects of personal value.

Although the average person still retires at 62, the SBA says an ever-increasing number of workers just don’t see themselves taking up golf or crocheting doilies. Instead, they’re acquiring new skills and creating new professional networks.

Next Avenue and PBS NewsHour offer 10 tips to help senior entrepreneurs get started. Connecting with other entrepreneurs, freelancers, and a new support crew of accounting, law, financial, and insurance professionals can keep you connected. And even old dogs can learn new digital, mobile, and social media tricks.

Some seniors approach self-employment as an extension of their existing careers – perhaps a natural move into consulting. Others find it an opportunity to try something completely different. A financial officer, for example, might transition into running a corporate accounting firm. Or open a shave ice stand.

Retired Brains shared its readers’ descriptions of their businesses, many of which are scaled small to keep the business manageable. Some require little preparation, such as home organizing and house sitting. Cleaning, landscaping, and pet care operate on predictable schedules or in specific seasons. Catering, baking, and handicrafts allow an owner to keep supply low and demand high.

No matter what you’re considering, though, starting a business requires preparation. Forbes published an expert interview full of suggestions to help you get started.

JoAnn Gometz is a freelance writer, editor, and content strategist. She enjoys writing for small businesses and individuals because she gets to learn right along with her readers. JoAnn's earned an MFA in Creative Nonfiction, competed twice at the World Pipe Band Championships, driven solo around the country, and taught drumming to very talented kids. She also hikes and kayaks with a camera in hand - and she’s writing a nonfiction book that’s not related to any of these things.