Two things turned Scott Silverman from a junkie into a successful social entrepreneur: Near suicide and an interaction with a homeless man at a food kitchen. Lendio’s exclusive interview with this CNN Hero Award winner outlines 5 tips in starting a non-profit:

In 1984, Scott Silverman sat on the edge of a window seal and looked down 44 stories to the streets of New York.

“I just sat on the edge and thought, ‘If I just leaned, I’d hit the ground in a few seconds and all my pain would be over,'” he said.

He was addicted to methamphetamine, cocaine and alcohol, and his struggles all combined in that moment to make death seem preferable to living. He started pushing himself through the window, when someone walked into the room and said: “What are you doing? You’re going to fall out the window!”

Silverman stepped back into the room and emotionally broke down. He immediately called his wife and told her he was ready to do whatever needed to be done.

“When you are ready to say goodbye to the world, that is a clear bottom,” Silverman said. “That second changed my life.”

Since then, he went into treatment, got sober and found solace and fulfillment in helping others similarly change their lives.

That satisfaction has since turned into a multimillion dollar non-profit called Second Chance, where he’s helped more than 24,000 economically disadvantaged and homeless persons gain employment, find shelter and leave gangs and a life of crime. He’s now a best-selling author, received many awards, including the CNN Hero Award, and San Diego recognizes Feb. 19 as “Scott Silverman Day.”

Before he started Second Chance, he volunteered regularly in a feeding kitchen. After a few months he started noticing the same people — regulars of the food kitchen.

He finally approached one man and asked “Why are you here every Sunday?”

The man gave Silverman an array of reasons, including that he was on probation, that nobody would hire him.

“I told him, ‘These sound like excuses.’ Then I said, ‘How would you like me to help you get a job?'”

Eventually, through Silverman’s guidance, the man shaved, bought new clothes, got a job, and got off the streets.

“This guy came back and I didn’t even recognize him.”

Silverman found his passion and his calling.

Helping others is what truly brought Silverman out of his drug addiction and depression.

“The more I gave away, the more I got to keep,” he said. “This is a way to give of yourself to create a better place on the planet. Do something for others and you will do better for yourself: You just don’t get that in the regular business model.”

“You still have to perform. You have to cover your expenses and show an ROI,” he said. “It took me four years to make any money.”

Silverman’s 5 Steps in Starting a Non-Profit

For anyone who wants to be a social entrepreneur, Silverman has some critical advice. He started his organization from the ground up and overcome many obstacles along the way. These steps will give you a head start.

1. Know you really want to do it — “Go volunteer first,” Silverman said. “If you can do something as a volunteer, you’ll give it all you got when you can get paid for it.”

2. Do some market research. “Find out how many non-profits are already doing the work you want to do. Find a way to collaborate with them. Think about the clients you’re going to serve, what the needs are, and if it’s a good fit for the community. Who are your customers going to be? Are there many customers?”

3. Know that you’re starting a real business. “Know it’s not going to happen overnight. You’re going to need expertise around you. You’re not just buying a product or service. You’ll have investors to answer to, and you’ll need to be prepared to work with multiple constituents. You still have to perform, cover expenses and have an ROI.”

4. How are you going to live? “Know that you’re going to have to be comfortable being uncomfortable. You have to believe it’s going to happen, but it may not happen in your time frame.

You can figure 6 months, but it may take you 2 years. If the industry says it takes XYZ, you’re not going to be able to fasttrack it. Sometimes you can get lucky, but when you’re dealing with the public, and people, it’s unpredictable. Always ask ‘How do I help more people? and ‘How do I make this scalable?’”

5. Is it a hobby? “Is this something you can make a living from? Or is this something that should just be a hobby? Can you make it into a business or should you just keep volulnteering somewhere?

Silverman wrote a book “Tell Me No. I Dare You” about the lessons he’s learned along the way. The themes are about taking personal challenges, turning them into strengths, and finding what really motivates you.

As Silverman tells his story, it’s hard to imagine he was ever in such a dark place where he’d want to take his own life. He got a second chance at life, and has guided thousands of others do the same. Those stories have one similar theme: failure. Silverman and all of his clients at one time failed miserably, but picked themselves back up. All business owners usually go through a similar cycle.

“Fail often,” Silverman said, “so you can succeed quickly. Success is in you. Have the attitude of “Tell me ‘No’ I dare you.” 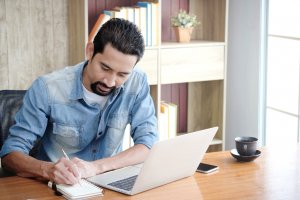 Blog
What Is a Lien?