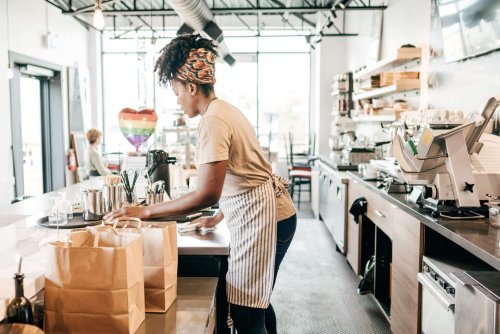 How to Support LGBTQIA Businesses Beyond Pride Month

Every June, businesses break out the rainbows: logos, t-shirts, signs, and email signatures are everywhere. But do rainbows really add up to supporting the LGBTQIA community?

Pride for corporations has largely become performative in an attempt to capitalize on public opinion shifts, according to Harvard Business Review. 67% of millennials and Gen Z do not believe businesses should be allowed to refuse services to LGBTQIA people for religious reasons, compared to 60% overall. 63% of Americans also agree that gay marriage should be legal, up from 27% in 1996. With so much support, corporations want to cash in.

With 1.4 million LGBTQIA businesses in the US, it will take more than rainbows for a few weeks each June to lift up a historically marginalized community. Here’s how individuals can make a difference.

Standing Up for LGBTQIA Rights

One way businesses large and small can support the LGBTQIA community—and LGBTQIA-owned businesses—is by banding together in coalitions against political action that threatens civil rights. Dollars often speak louder than words, at least for politicians.

“The historic transformation of this community’s place in society has been led not by government or politicians, but instead by corporations that have embraced and supported their own LGBTQ employees, reached out to earn business and loyalty from LGBTQ consumers, and through advertising, helped normalize LGBTQ people and LGBTQ families for mass audiences,” writes Thomas Roth and David Paisley in the Washington Post. “Whether out of self-interest or goodwill, corporations have often been there for LGBTQ communities first.”

In Indiana, for example, when Vice President (then Governor) Mike Pence signed a bill allowing businesses to turn away LGBTQIA customers and employees under a “religious exemption,” 12 businesses pulled out of upcoming conventions, representing a loss of $60 million. The Indiana Coalition helped encourage this campaign and change the law.

A similar situation occurred in response to North Carolina’s “bathroom bill,” which restricted transgender rights for public and school bathrooms. Shortly after the bill was signed, more than 140 prominent CEOs responded in an open letter to the governor, and the state lost $630 million in canceled events. This kind of pressure contributed to a later repeal of the law and subsequent replacement. (Though it’s less clear if the replacement is any better.)

Supporting businesses that have joined a coalition or working within your business to sign petitions or end sponsorship deals and events in states actively working to discriminate against LGBTQIA people, like this list of companies that boycotted North Carolina in 2017, can be a start to reversing years of discrimination.

Just because a business sells Pride-inspired merchandise doesn’t mean it actually supports the LGBTQIA community. In fact, some businesses actively donate to anti-gay campaigns, even though they sport the requisite rainbow logos and talk about inclusivity during Pride month.

Some specific campaigns for 2020 that go beyond optics include:

Another way to look for businesses to support is through sponsorship lists of charities and nonprofits working to support the LGBTQIA community, such as this list from the Trevor Project.

When you support LGBTQIA-owned businesses, you’re not just helping individual entrepreneurs and business owners but also their employees. The Supreme Court affirmed in Bostock vs. Clayton County Georgia that the Civil Rights Act of 1964 includes protections for gay, lesbian, and transgender employees from discrimination. It took until June 2020 to make it illegal for companies to fire someone for identifying as gay on a federal level (21 states already had protections in place).

Another indicator of real support for the community is how corporations treat their employees. Basic policies like paid parental leave regardless of gender, establishing inclusive policies in the workplace like normalizing pronouns, and creating LGBTQIA groups for employees are just the start.

Human Rights Campaign’s Corporate Equality Index establishes a benchmark for LGBTQIA-friendly policies, with a 100% designation meeting the full list of criteria for workplace equality, including training, a diversity council, equal benefits for same-sex partnerships, and demonstrated public support for the community. In 2002, only 13 companies received the 100% designation—in 2020, it’s over 200. Businesses ranging from Bank of America to Accenture and Nordstrom received this year’s designation.

Go Beyond Rainbows and Beyond Pride Month

To truly support LGBTQIA-owned businesses, evaluate the choices you make with your money—a little extra effort can go a long way. It’s not enough to assume that just because a company sports a rainbow logo or participates in a Pride Parade that they’re truly an ally to the community.

When it comes to your business, evaluate partnerships and initiatives through a lens of diversity and inclusion, whether that’s donating a percentage of your profits during the month of June, signing a local petition against a discriminatory policy, or evaluating the benefits you offer your employees to make sure they’re truly equal for all.