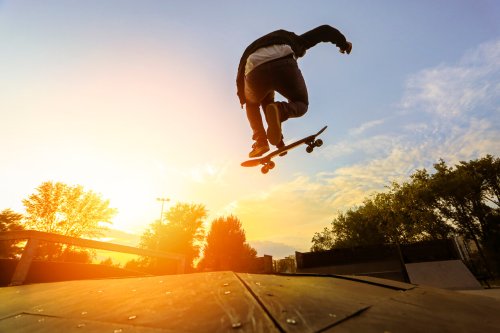 At the 2018 Qualtrics X4 Summit in Utah, Tony Hawk spoke about his experiences as a skateboarding competitor and entrepreneur. He told how, as a 14-year-old, he entered his first major skate competition. On the application form, there was one box that said “amateur” and one that said “professional.” Hawk certainly wasn’t a professional, but he wanted to be one. So he checked the “professional” box and immediately noticed how people treated him differently. He may have only been 14, but he’d staked his claim in the skating world.

As reported by Entrepreneur, Hawk has long made a habit of “going big.” This ambitious approach to life helped him transcend the traditional business limitations of skateboarding to lead a merch brand, apparel company, and billion-dollar video game franchise.

“If you go out to take a risk and you don’t do it with confidence, you are going to fail because you’ve already created the worst case scenario in your head, and that’s what’s going to follow,” he told Entrepreneur. “When I try to do something, I think I’m fully capable of this and I’m going to make it work.”

Of course, things seldom turn out like you initially imagined. But that’s the learning process that has helped Hawk evolve over the years. He’s candid about some of his business failures and insists that everything is manageable as long as you have solid partnerships and control your brand.

In a recent interview during the Iconic Tour sponsored by Inc., Hawk discussed how he foolishly signed away the control of his likeness and name while in his early 20s. Soon, his name was appearing on low-quality products that left Hawk feeling exploited and embarrassed.

Following those early frustrations, Hawk made sure that when the time came to sign new deals he found partners he could trust. Due diligence led to strong collaborations, which ultimately produced his top-selling video game empire.

One final tip from Hawk is that as your success (and corresponding pressures) increase, strive for balance. This means giving proper attention to home life. “At some point you have to stay focused on your family and you need to stay available,” he insisted.

While this is easier said than done, Hawk makes it work by selecting projects that allow him to include his family. And when that’s not possible, the criteria then becomes impact. Basically, he wants his time away from home to be as worthwhile as possible for everyone.

“I truly believe that success is based off of doing what you love for a living,” said Hawk. “Financial gain or adulation or celebrity, all that stuff is incidental to truly enjoying your work, and I’m a living example of that.”