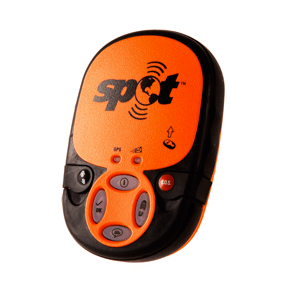 On Saturday I spent the afternoon in the saddle riding over three mountain passes in Utah and Idaho. My goal was to escape the heat and be alone with the voice inside my head for a few hours.

Four or five months ago I purchased a GPS tracking unit for a 24-hour rally I was going to participate in. I’ve since included it on any ride over two or three hours because my little SPOT Satellite GPS Messenger not only allows me to send out an emergency message via satellite should I ever get in trouble (a feature I hope I never need to use), it also allows me to send a pre-determined message to my wife’s email along with a text message whenever I feel the urge to press the “send” button. Although my pre-determined message is simple, “I’m just checking in. Doing good and having fun” along with a Google map display and GPS coordinates of where I am, it gives my wife the peace of mind to know that I’m not dead along the side of the road somewhere. Had I known something this simple would have relieved so much stress for her, I’d have purchased one long ago. And, the fact that I’m a gadget nerd and enjoy the technology associated with such things doesn’t hurt either.

I’ve also noticed that something as simple as a little transparency or visibility seems to provide a lot of benefit in the workplace too. Over the years, I’ve come to attach my own definitions to the two words and will share them here. Although many people use the two terms interchangeably, I attach a subtle difference to the definition:

My little SPOT gives my wife visibility into where I am and my condition—hopefully by now she already knows “why” I’m out there. In this case, she experiences the benefits of both transparency and visibility (we don’t need to get into a discussion about who takes the role of CEO in my family).

As important as visibility can be to inform decisions, if it’s used as a whip to punish employees or compel performance, you won’t have it for very long. The nature of old-school command-and-control leadership models make true visibility a pipe dream as employees will make sure the boss sees what they think he or she wants to see, instead of what they need to see. They might even make sure they don’t see anything. For example, if my wife was cranky about where I was going and what I was doing, I would simply stop sending her the update messages or turn the SPOT off—it’s that easy for your employees too.

Employees don’t mind giving the boss visibility when they know it will be used to make better decisions and solve problems early, before they get out of control. But when it becomes a whip, nobody is too anxious to cooperate.

In my opinion, transparency is where business leaders have a real opportunity to impact the workforce. When people understand the “why” behind what they’re doing, leaders have an opportunity to inspire buy-in and motivate employees to step up and perform at a higher level. When employees are motivated by a worthwhile mission and vision (transparency), we get their best work. “Because I told you so” has never been a good motivator.

Many companies spend a lot of money trying to ensure they have visibility into what’s happening in the workplace. They purchase software tools that monitor employee output, keep track of metrics, and create informative reports and dashboards. These tools are important, but without transparency into the decision-making process, I question whether or not anyone will ever have real visibility—regardless of the tools you choose to use.

What are you doing to get visibility into the work your workforce does? How do you facilitate a transparent work environment?