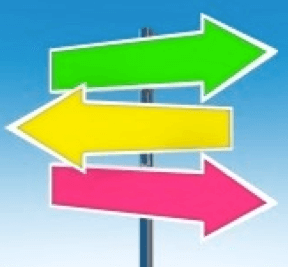 In a season seven episode of Seinfeld, George and Kramer have a miscommunication over a birthday card for George’s boss, George Steinbrenner, owner of the New York Yankees.  Earlier in the episode, while eating breakfast, Jerry inadvertently squirted grape fruit juice in George’s eye.  As a result, George spends the remainder of the episode inadvertently winking.

Upon seeing the birthday card, Kramer tells George they could make a lot of money off the card by selling it to a memorabilia dealer.   George responds that he doesn’t want to lose his job over a few extra bucks and winks due to the grape fruit juice in his eye.  Kramer takes this wink as the go-ahead to sell the card.

Later in the episode George returns to Kramer’s apartment to get the card and instead Kramer hands George his cut of the “loot.”  George is furious and asks Kramer who told him to sell the card?

Kramer’s response: “You did.  Well maybe in not so many words, but I believe we had an understanding.” As he says the word understanding, Kramer winks at George.

George proceeds to explain that it wasn’t a wink and that it was the grape fruit juice stuck in his eye.

Effective communication is critical to accomplishing goals and objectives and to being a successful leader.  I know a person that whenever she wants something she leads off with the word “maybe.”  For example, “Maybe you should …”  At first it seems like a suggestion.  However, I’ve known this person long enough to know that “maybe” means get it done.

A friend was telling me how a boss he used to work with would always say, “You might wanna …” whenever she wanted you to do something.  In this case, the “you might wanna” translated to, “do it right now.”

It took me a while to learn that when my friend says “maybe” there is an alternate meaning behind it.  While in her mind this means go do it now, in my mind I was taking it as a simple suggestion and, at times, I didn’t do what I thought she was “suggesting”.  Similar to the Seinfeld episode, the disconnect between meanings caused some weird and comical moments.

In the example of my friend, he used to watch and wait for the humor that ensued when his boss would tell an employee the first time, “You might wanna … “ He’d watch as the new employee would look confused and almost wonder aloud if he or she was supposed to be doing something specific.

If the new employee didn’t do what the boss said they “might wanna” do, my friend would take a few minutes to decode the message for the new employee.  The new employees were always grateful to him for the translation and heads up on what that particular phrase meant.  This friend knew from experience the pain sometimes associated with not doing what the boss thought was clearly expressed and expected and wanted to make sure this same pain was avoided by new employees.

Here are a few tips to avoid having your communication lost in translation:

I’m a firm believer in effective communication and advise my clients to be direct and precise in what they want.  If you need a translator to decipher what you’re asking the chances of the task getting done decreases significantly.  On the other hand, if you can clearly and accurately communicate your expectations you won’t have to worry about whether or not the message is being received and can focus on other, more important, things.