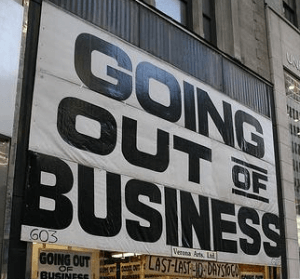 Watch Your Step—Nobody is Safe It’s not just small business that sometimes struggles to stay alive. Only about half of the small businesses that started 10 years ago are still around today, but even iconic brands struggle and sometimes even just disappear. “Just over a decade ago, Sony Ericsson was one of the hottest cell phone makers in the world,” according to 24/7 Wall Street. “Similarly, Cingular was one of the most popular wireless carriers. And Compaq, too, was one of the hottest PC brands. Now, these brands and several others have effectively ceased to exist.”

There are lots of reasons why a household name might suddenly vanish—some of the brands on this list I don’t even think I noticed when they disappeared. “When brands vanish quickly, it is often a product of significant mismanagement coupled with industry pressures,” they continue. “This was clearly the case with companies such as Saab and Sony Ericsson. Saab, which was once a successful niche automaker in the United States, failed to maintain a successful brand into the 2000s. A series of failed deals and missed payments were the nails in the coffin.”

Check out seven icons you are likely familiar with, that the next generation will never know:

As little as five or ten years ago, these were some of the most recognizable brands in the country. Some of the brands were mismanaged, some suffered from a singular catastrophic event (the mortgage loan crisis), and others were mismanaged after mergers. Sometimes all it takes is a misstep—and it even happens to companies you’d think were safe and insulated from such things.

Watch your step—nobody is safe.