You’re Going Out of Business Sooner or Later, Why Not Later?

I recently watched a 60 Minutes interview with Jeff Bezos, CEO and founder of Amazon.  This interview focused on Amazon’s current operations and future innovations. During the interview, Charlie Rose, the correspondent, asks Bezos about Amazon’s impact on small business. I want to focus on two different parts of the interview:

(This part of the interview can be found at 8:40)
Rose: A lot of small book publishers and other small companies worry that the power of Amazon gives them no chance.
Bezos: You gotta earn your keep in this world. When you invent something new, if customers come to the party, it’s disruptive to the old way.
Rose: But, there are areas where your power’s so great and your margin you’re prepared to make is so thin that you could drive people out of business and you have that kind of strength and people worry, “Is Amazon ruthless in their pursuit of market share?”
Bezos: The Internet is disrupting every media industry Charlie. People can complain about that but complaining is not a strategy.  Amazon is not happening to bookselling, the future is happening to bookselling.
(This part of the interview can be found at 13:30)
Bezos: Companies have short lifespans, Charlie, and Amazon will be disrupted one day.
Rose: And you worry about that?
Bezos: I don’t worry about it because I know it’s inevitable.  Companies come and go. And the companies that are the shiniest and most important of any era, wait a few decades and they’re gone.
Rose: And your job is to make sure to delay that date?
Bezos: Sure! I would love for it to be after I’m dead. (Laughter)

After listening to both of these conversations I couldn’t help but think about Blockbuster going out of business. Growing up I never would’ve guess that one day I wouldn’t be able to rent a movie from Blockbuster.  Its downfall came because of companies like Netflix and Redbox—who offered an inexpensive and more convenient service. However, It didn’t go down without a fight.

Blockbuster invested forty million dollars toward developing and marketing an online streaming platform to compete with Netflix. It also began a dollar rental program to compete with Redbox. But it’s difficult to bring back customers who’ve already decided they like your competitors more than you. Especially when you are just mimicking their services.

Corporate giants like Walmart or Amazon are constantly opening up new stores across the nation. Small businesses face this dilemma all the time and sadly can’t compete. There will always be a competitor trying to take your customers. That’s capitalism. So what do you do when the competition moves down the street?

1. Don’t do anything drastic

When your customer base is declining it’s easy to panic. Don’t panic. Breathe in, breathe out. The last thing you want to do is to make drastic short-term decisions that will lead your company to worse off circumstances.

A drastic decision could include, but is not limited to: laying off employees, getting rid of a product or service that doesn’t have high margins, creating a new product or service without thinking about the costs, or even throwing in the towel immediately by closing your doors.

Sit down with your executive team, mentors, other business leaders, and/or anyone with an opinion you respect. Create a SWOT analysis of your company as a whole then go through and create a SWOT analysis of each of your products or service you offer. After looking at those, create a list of things you can do to improve what you currently offer or a list of products or services you can innovate with.

One thing companies typically do when their competitors come out with a new service or product is pull out the “me too” card. Instead of innovating and creating a new need for a service or product they just make their own version of the product or service a competitor might offer.

Steve Jobs told a story of when they brought out a new line of iMac’s but forgot to include CD drive that could burn CD’s for music. All of Apple’s competing products all had a CD drive that could burn a music CD.  He asked himself, “How did we miss this?” His team immediately began thinking of ways they could solve the problem. The most logical answers was to make an external CD drive with a burner for sale.

Jobs didn’t like playing catch up and decided to play leap frog instead. Apple then developed the iPod and iTunes to accompany it. His logic was, what if we get rid of the need of a CD by providing a portable device that held thousands of songs and albums in your pocket.

High quality customer service is the easiest and least expensive thing you can do to avoid losing customers. If you take care of your customers and turn them into life-time customers they’ll become your biggest advocates. They’ll enjoy dealing with your business so much they too won’t want to see your doors close.

I recently totaled my car and had to replace it. Thus began my search for a car. I did some research online to find a car I wanted and get an idea of what would be the best price I could get it for.

A neighbor of mine saw the picture of my car all mangled on Facebook and recommended checking out  Murdock Hyundai. He told me they would take care of me.  The process from beginning to end was very pleasant and their team went above and beyond my expectations for buying a car. I even got a text a couple days later from my sales rep asking how I like my car and if there were any questions or concerns I had.

Our world is constantly changing; and that includes what your customers want and need. Strategic innovation is key to staying ahead of this constant change. You don’t have to be a tech company to innovate either. Innovation is simply coming up with a new way to solve a pervasive problem with a solution people would gladly pay for. Making sure your create something people are willing to pay for is the most important part if you intend to make a successful business out of your idea.

When Amazon started selling books online there were many pundits predicting they would fail when more recognizable brands, like Barnes & Noble, got online. Instead of complaining Amazon strategically innovated and now are the biggest online retail and service provider. You too shouldn’t worry about failing. You’re going to get disrupted by another business sooner or later anyway. Why not make it later?  Keep on innovating and moving your company forward. 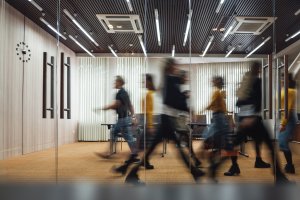