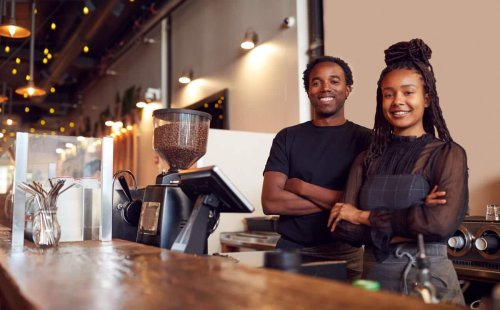 The State of Black-Owned Businesses

A recent poll by Color of Change found that nearly half (46%) of Black-owned small businesses have already folded or project that they will go out of business within the next 6 months unless their circumstances change or they receive support from the federal government. The pandemic has negatively impacted business owners of every hue. The issue is compounded for Black small business owners who have been less likely to receive Paycheck Protection Program support or other types of financial support, which is one of the many challenges that POC business owners face.

It’s a dire indicator. However, we wanted to put a face on this statistic, so we spoke with 3 Black business owners to get their views on the state of Black-owned businesses and listen to their suggestions.

Tomeka Lynch Purcell, a money mindset coach and author of “Morgan Saves for College,” tells Lendio that her business is definitely doing better now than it was before the George Floyd incident. “People are finally starting to pay attention to us, and we have come together as a community to become stronger,” she says. “But there is still a long way to go as there is much inequality in the business sector for Blacks.”

Purcell is referring to what has been called the summer of social justice, which produced not just protests but also overwhelming support for black businesses. According to Yelp’s 2020 2nd Quarter Economic Impact Report, there were more than 2.5 million searches for Black-owned businesses on the company’s website between May 25 and July 10, compared to just 35,000 searches during the same time frame in 2019.

In addition, behemoths like Facebook announced plans to invest an additional $200 million in Black-owned small businesses and nonprofits. (A previous Facebook announcement had already committed $1 billion annually in diverse suppliers.)

It’s a lot of money, but considering the number of Black businesses trying to stay afloat, these types of initiatives may not provide enough life rafts.

“As a Black business owner, I’m facing many of the same issues that other small businesses are facing,” says Marcus Johnson, owner of FLO Brands in Washington, DC. He says the main issue is just uncertainty in the marketplace. “While optimistic, due to the election results, I’m concerned about the middle-class employees’ ability to continue to find and maintain employment that will allow them the disposable income with which they bolster the economy and our lifestyle products.”

Johnson owns a wine brand and is also a jazz musician, and between the two, he believes the saving grace for his business is that he’s actually in the “therapy business,” which greatly appeals to stressed-out adults by adding a level of normalness. “Our online wine sales are increasing, as well as our music streaming across all of the streaming platforms,” he says. “Also, now that consumers are used to the virtual live performance experience, we are starting to receive more inquiries about performance opportunities.”

He definitely believes that Black-owned businesses have been beneficiaries of the George Floyd tragedy. “While it hurt many of us to witness his death, it forced many non-Blacks to look around to see whether they were contributing to a culture where such environments were acceptable in their industries.”

As a result of companies addressing their lack of inclusiveness and making concerted efforts to find Black companies, products, and services, Johnson says he has secured a new production deal, distributors, and retail outlets for his wine brand. “In both the wine and music industries, we are still underrepresented at the executive level, but this new movement toward the engagement, promotion, and development of Black-owned businesses is a tremendous help.”

Terrill Currington is the CEO of Celurius, which provides coaching and consulting to entrepreneurs, and he says the pandemic has delayed one of his land development projects. “Because of the racist lending practices I’ve encountered since my mid-twenties, I fund my businesses with my own cash to avoid this toxicity.”

And Currington says the pandemic has definitely affected his business plans. “The cash I would normally put into the business has been diverted to float our household during this crisis,” he explains.

Looking Out Over the Black-Owned Business Landscape

Expanding her view to other Black small businesses that she is aware of, Purcell says that some are doing well, but others are not. “The ones that are doing well are pivoting to the current climate, and the ones that are not are standing in the same place,” she says. “However, everyone is doing everything they can to hold on.”

And the ability to pivot seems to be the determining factor between companies that are above water and those that are not. Johnson says that most of the business owners that he knows are hanging in there or actually thriving—but admits that it varies by industry and specialty. “My friends and family that are in highly-specialized luxury medicine aren’t doing so well right now, but I don’t think that’s a Black thing,” he says. “Black colleagues of mine from law school and business school continue to pivot, and my Black friends in wine are doing OK as well.”

On the other hand, he says the Black entrepreneurs he knows who seem to struggle are in the music field as artists. “Many of them have left the live performance field altogether since COVID restrictions have decreased their ability to generate income.” Johnson also laments that most business schools don’t teach the business aspects of the music industry. “Many of these traditionally educated artists don’t understand that they are the CEOs of their artistry and thus have many different ways to pivot to non-performance jobs.”

Since Black businesses encounter more obstacles and challenges than other groups, it would make sense that a greater level of effort is required to help these establishments gain equal footing. Purcell applauds the creation of directories for Black businesses as a step in the right direction. “Also, we need more on a city, state, and countrywide level when it comes to government funding and regulations, especially for loans for small businesses in different sectors, as well as PR and marketing highlighting certain black businesses that are not getting the attention they deserve.”

Currington agrees that funding would certainly be a step in the right direction. “Business grants of $10,000 to $50,000 would be a powerful countermeasure to the lack of capital extended from white lending institutions,” he says.

Johnson’s first recommendation is for the greater community to form professional relationships with Black businesses. He lists the following professions in particular: