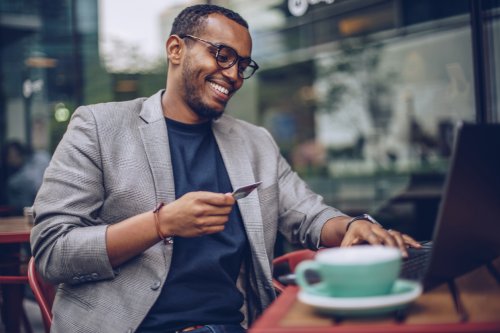 5 Traits That Say “You Shouldn’t Be an Entrepreneur”

Ready to be your own boss but not sure you have what it takes to be a successful small business owner? Then you’re in good company. While there are over 30 million small businesses in America, considering there are about 250 million adults in the country, only roughly 11% can add the title “business owner” to their calling cards.

Rather than trying to list the myriad traits that startup moguls possess, it’s simpler to focus on the process of elimination: traits that may indicate business ownership isn’t for you. However, if you see yourself in this list, fear not: each of the following five traits can be overcome, although you may just have to work a little harder to get there. Still, if you’re willing to dedicate yourself to achieve your dream, you can also take comfort in knowing that trait #5 doesn’t describe you at all.

1. Competition? I’ll Sit This One Out

Are you the type of person who wheels and deals and strategizes exactly how you’re going to avoid mortgaging Baltic Avenue while also shoring up the deed to Water Works and your fourth railroad? Does your drive time find you making mental lists of tricky words that your opponent will never guess in Hangman? Then, yes, you might have the competitive trait needed to survive in business ownership.

Competition is an inescapable part of entrepreneurship, and people either thrive or die by the challenge. In fact, there’s scientific data that shows that entrepreneurs are not only more competitive than other people, they enjoy competition. According to a paper published in Small Business Economics that summarizes the result of an incentivized competitive game:

The results of our lab-in-the field study suggest that entrepreneurs, both revealed and potential, are more likely than non-entrepreneurial individuals to choose competitive payment schemes in experimental settings, irrespective of their confidence in winning and irrespective of whether the task in which they compete relates to their skills or to chance alone. This suggests that entrepreneurs’ selection into competitive situations is driven by their enjoyment of competition rather than motives related to personal development or willingness to win.

Those with the business spirit enjoyed the competition itself, according to the study, even more so than personal gain or victory. If you get a little rush from competition, then owning a business may not be for you.

2. Networking? Do I Really Need to Connect?

The idea of a lone genius tinkering away in a garage and inventing the future makes for a nice Act 1, but that’s not how the typical business story unfolds. Most entrepreneurs can’t do it alone—they need a strong network of collaborators, partners, consultants, and mentors to help them along their journey to a successful business.

A survey of 350 entrepreneurs, angel investors, and venture capitalists showed just how important networking was to the ongoing success of their various businesses. The network was paramount in hiring and fundraising; that’s pretty obvious. But here’s a surprising stat: 35% of founders said they found vital “emotional support” from their network.

Starting a business is tough, and many underestimate the importance of having a strong base of emotional support through the ups and downs. And the only way to find like-minded professionals in your industry:  network continually.

15 million American adults have Social Anxiety Disorder, and millions more find networking difficult in general. While it’s not impossible to run a startup without reaching out to people constantly, it will be a hindrance if you have a hard time leaving your comfort zone. Luckily, there are increasing online methods of networking that can—and have—helped socially anxious people, and it’s good to see the concept of “networking” evolve in our tech-forward age.

3. My Receipts Are Safely Tucked Away in One of My Shoe Boxes … Or Maybe in My Car

Being good with money isn’t the mark of a gifted entrepreneur, but rather the mark of one who may last longer than the 2–5 year failure rate milestone. Do you account for every purchase? Do you prioritize what your business spends its money on? Do you keep good records?

Here at Lendio, we’ve seen firsthand the difference in success between small business owners who practice good money habits (for example, understanding what expenses are tax deductible and what aren’t) compared to those that barely care to balance their ledger at the end of each quarter. Spoiler: the former succeed at a much higher rate.

If basic bookkeeping isn’t your strong suit, try an app or software (obviously, we suggest Lendio’s software) to keep you in check. You can even automate your bookkeeping, which will free up your time to focus elsewhere—like developing strategies for growing your business.

There’s a long list of common fears: spiders, ghosts, spider-ghosts. But you may be surprised to learn that “failure” is the greatest shared fear we have, says the Los Angeles Times:

Fear and exhilaration do go hand in hand, and fear of failure is common. A recent survey by the social network Linkagoal found that fear of failure plagued 31% of 1,083 adult respondents—a larger percentage than those who feared spiders (30%), being home alone (9%) or even the paranormal (15%).

But risking failure is simply part of the game when you own a business. Investing money, time, and energy into a startup can have a physical and emotional cost, particularly if you’ve heard that half of all businesses fail—although that statistic isn’t entirely accurate.

The true failure rate is more promising: 20% of new businesses fail in the first 2 years; 45% in the first 5 years. But, no, neither of these provides a 100% guarantee that your business will survive.

Entrepreneurs are natural risk-takers—they know that failure is possible, but they’re willing to try anyway. If you need guaranteed success or don’t have the stomach to stand up to a risk of failure, then you might want to keep your day job.

In middle school, my parents forced me to take piano lessons. They drove me kicking and screaming to the instructor, and sat me down at the home piano for an hour each day. In college, I picked up a $50 guitar because I wanted to be that guy at parties to impress people.

Guess which one stuck?

It’s all about motivation, specifically self-motivation, when you’re looking to accomplish something difficult like starting a business. External motivations will usually fail you because they’ll go away, or you’ll block them out. But internal motivation, being your own engine, will carry the day.

On average, entrepreneurs work more than 50 hours a week—but those are just their “billable” hours. Moreso, they are “constantly working,” either thinking about their business during off-hours, networking with people in the industry, or reading and researching. Many entrepreneurs also say they are “always on,” a trait which is unhealthy but sometimes necessary.

Belief in both your business and yourself are the keys to being your own engine. Successful entrepreneurs don’t need an outside force keeping them working—they have an internal drive that isn’t easily extinguished.

If you’ve ever voluntarily learned a new instrument or language; made and kept a promise to yourself to exercise daily regardless of the weather, social invitations, or a simple lack of care; or practiced the “don’t break the streak” method like Jerry Seinfeld, then congratulations. You  know what it takes to keep yourself dedicated, driven, and focused. Your small business will thank you.

Robert Woo: Robert writes on small business growth and entrepreneurship. He is passionate about running his own business. In addition, Robert's also enjoys focusing on helping business owners accomplish their tasks swiftly.

Robert Woo is a freelance writer and marketer who has been running his business with Sunrise by Lendio for more than a decade. He focuses on the tech and finance industry, has been a featured contributor of Lendio, and regularly shares his experience with software via blogs and articles. During any remaining free time, he's obsessing over fantasy football, writing for television, and playing guitar just enough to maintain the calluses on his fingers.