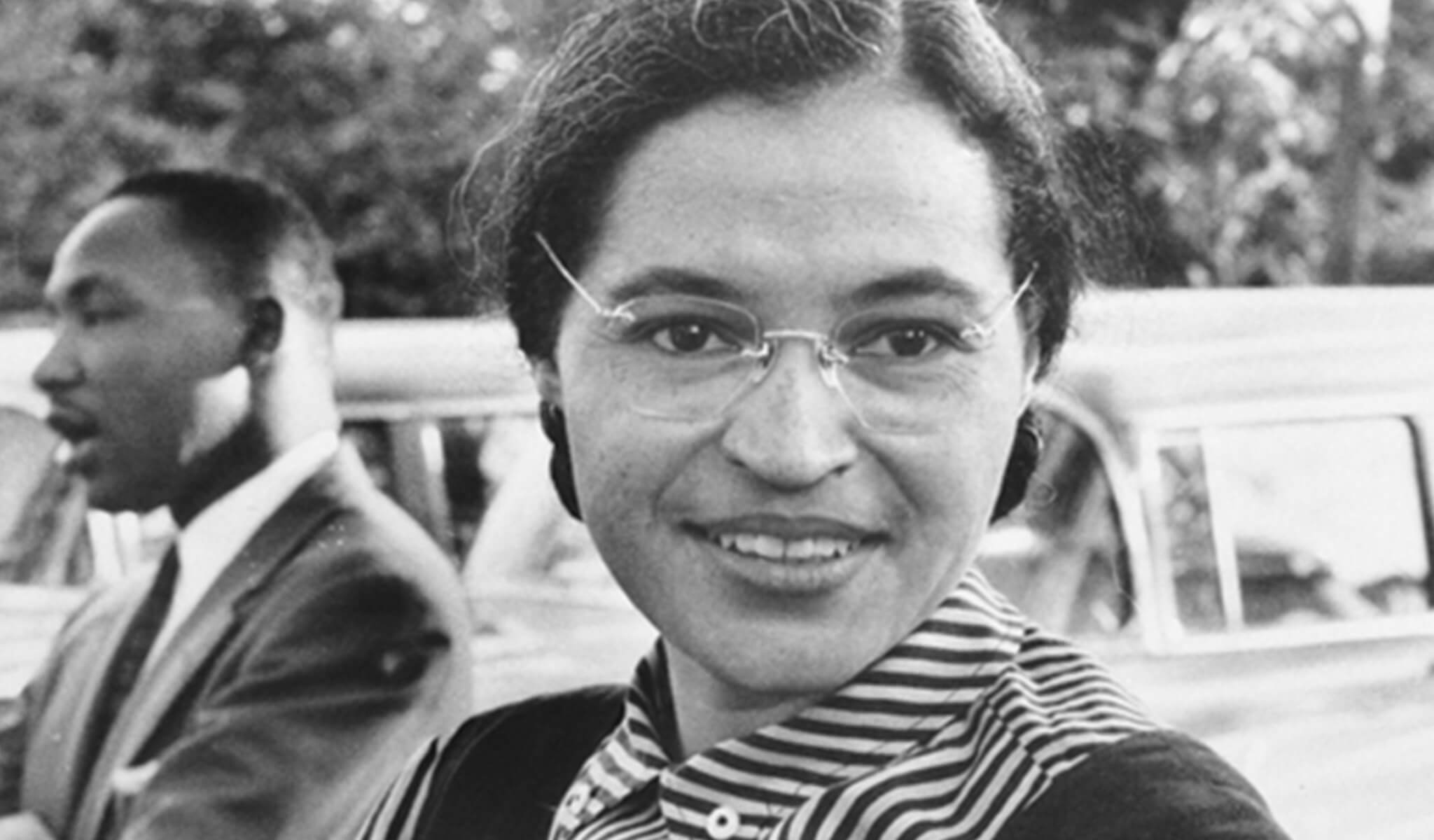 Black History Month is a time to celebrate the contributions of those who advanced the cause of civil rights for Black people. While the men tend to garner most of the attention, many Black women also took the lead. For example, do you know who is considered the mother of the modern-day civil rights movement or who was the first Black woman to run for president (hint: it’s not Kamala Harris)?

In part 2 of our series on heroes of the civil rights movement, we’re focusing on 3 more legendary Black women.

Rosa Parks is well known for refusing to give up her bus seat to a white passenger, but there’s so much more to her story.

Parks was born in 1913 in Tuskegee, AL, and at the age of 2, when her parents separated, her mother moved Parks and her brother to Pine Level, AL, to live with her grandparents. Segregation was always a part of her early life. She attended a 1-room Black school that didn’t have such basic supplies as desks, and all of the students had to walk to school. However, the white students in her city had a new, well-equipped school and bus transportation.

Parks moved to Montgomery, and at the age of 19, she married Raymond Parks, a barber by profession and a member of the National Association for the Advancement of Colored People (NAACP). She joined the organization as well, leading the local youth division and serving as the branch’s secretary.

On December 1, 1955, while leaving the department store where she worked as a seamstress, Parks sat in the Black section of the bus, as required by Montgomery’s bus ordinance. However, as the bus filled with more white people, the white section ran out of seats. The driver pulled the bus over and told the Black passengers to give up their seats to the white passengers.

Three of the Black passengers got out of their seats, but 42-year-old Parks refused. The bus driver called the police, and she was arrested and later released on bail. Parks is often quoted as saying she would not relinquish her seat because she was tired. However, in her autobiography, she explains that she didn’t mean she was exhausted after a long day at work. Rather, she said, she was tired of giving in.

Her act of civil disobedience was the impetus for the Montgomery Bus Boycott. The idea spread throughout the Black community by word of mouth, newspaper ads, and handbills to avoid riding the bus, starting on the day of her court appearance. Although she was found guilty and fined for violating the ordinance, it is estimated that on that day, 40,000 Black residents of the city either carpooled, took a Black-operated cab, or walked to their destinations.

The boycott lasted for several months—Parks was even arrested again on February 21, 1956, for her role in organizing the boycott. In June 1956, racial segregation laws were ruled unconstitutional, although the boycott continued until December because Montgomery appealed the district court’s decision, but ultimately the US Supreme Court ruled against the city.

Even though Parks became known as the mother of the modern-day civil rights movement, she left the South after both she and her husband were fired from their jobs. They moved to Detroit, MI, and she worked in the office of US Representative John Conyers. In 1987, she cofounded the Rosa and Raymond Parks Institute for Self Development to educate and inspire youth.

In 1996, Parks was awarded the Presidential Medal of Freedom by President Clinton, and Time Magazine voted her one of the 100 most influential people of the 20th century. Parks died in 2005, but on February 3, 2013 (which would have marked her 100th birthday), the US Postal Service released Rosa Parks Forever stamps. That year, she also became the first Black person to have a full-length statue in National Statuary Hall in the US Capitol.

Chisholm worked as a nursery school teacher, daycare center director, and educational consultant and was also a part of the NAACP, Democratic Party, League of Women’s Voters, and Urban League.

In 1964, she became the second Black woman in Albany elected to the New York State Legislature.

In 1968, Chisholm won election to the House of Representatives, beating 3 prominent Black men in the primary and a well-known civil rights figure in the general election to become the country’s first Black congresswoman.

She often ruffled feathers. Her first speech on the House Floor condemned the Vietnam War, and when she was assigned to the Committee on Agriculture, she appealed directly to the House Speaker and then on the House Floor and was reassigned to the Veterans’ Affairs Committee. She was one of the founders of the Congressional Black Caucus and the Congressional Women’s Caucus. Chisholm also worked on the Education Committee but gave up that assignment to serve on the Rules Committee, making her the first Black woman—and only the second woman—on that panel.

Education and addressing poverty were her passions, and she sponsored bills for federal education assistance, extended daycare hours, and school lunch programs, and she often criticized her Democratic colleagues as much as she criticized those across the aisle.

However, in 1972, the challenge of being both a Black candidate and a woman candidate was insurmountable to many Democrats who were convinced that she could not win against the Republican nominee, and she failed to win the support of many prominent Black politicians and white feminists. Chisholm’s name was on 12 primary ballots, and she received 152 delegate votes (10% of the total votes).

She continued to serve in Congress until 1983 (for a total of 7 terms). Chisholm then taught at Mount Holyoke College and was a cofounder of the National Political Congress of Black Women. Chisholm died in 2005, but her pioneering efforts paved the way for women and minority candidates to seek the highest office in the land.

Although Rosa Park’s defiance was a turning point in the civil rights movement, Claudette Colvin was the first known Black person who refused to give up her bus seat to a white passenger.

Colvin was born in 1939 in segregated Montgomery, AL. In an interview with the BBC, she recalls the process for getting a pair of black patent leather shoes for Easter shoes. “You could only get them from the white stores, so my mother drew the outline of my feet on a brown paper bag in order to get the closest size because we weren’t allowed to go in the store to try them on.”

Fifteen-year-old Colvin and 3 of her friends boarded a city bus on March 2, 1955. As was the case with Rosa Parks, there was a Black section in the back, but if there were not enough seats in the white section, Black passengers were expected to give up their seats and stand. As the bus became crowded and a white woman was left standing up, the bus driver told Colvin and her friends to get up. While her friends moved, Colvin remained seated.

Colvin states that she would have given up her seat for an elderly person but refused because she was asked to move for a young white woman. (Note: even though only 1 white person needed a seat, Black and white people could not share the same row, so Black passengers in the entire row needed to move.)

When the bus reached a junction where the police were waiting, Colvin was taken off the bus, handcuffed, and brought to an adult jail, where she waited several hours until her mother and minister came to get her. Although Colvin said she was not afraid when she refused to move from her seat—she said she felt mad because she’d paid her fare and had a right to sit there—she admits that she was terrified when she was in jail. Even when she was back at home, there were fears of retaliation from the Ku Klux Klan, as was the case when Black people engaged in civil disobedience. Her father stayed up at night with a shotgun (and the neighbors kept watch, as well).

The story even made the local news.

So why isn’t Colvin more widely known as the person who helped launch the Montgomery Bus Boycott? She was a teenager and became pregnant shortly after the arrest. According to Colvin, it was possible that her teenage pregnancy would be the focus instead of the boycott.

Although the court ruled to place her on probation, Colvin’s life changed. Now a well-known figure in Montgomery, she was seen by some as a rabble-rouser, which led to her dropping out of college (although she had good grades) and prevented her from getting a job.

She was also 1 of 4 women plaintiffs in the court case Browder v. Gayle that helped to end bus segregation in Montgomery, AL.

Colvin moved to New York, NY, and worked as a nurse’s aide until she retired in 2004. She says that she has kept a low profile since leaving Montgomery.

However, she will always serve as an inspiration for being a teenager who dared to stand up for her rights.