Home Your Business On the Back of An Envelope

Your Business On the Back of An Envelope 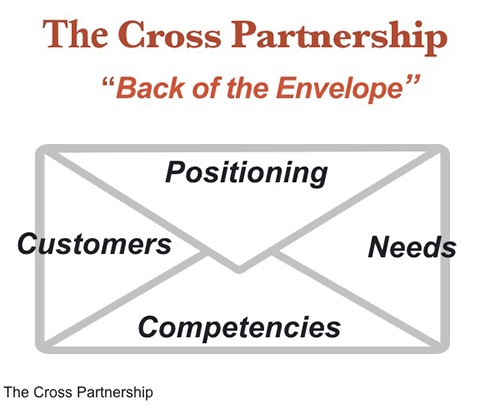 If you’ve been at the Atlanta Airport … past midnight … waiting for the last plane out … you know the scene.  The reenactment of Hieronymus Bosch’s Renaissance painting of Hades.  In the dim light of Gate 33.  Twisted torso’s in sticky blue vinyl seats awaiting the ultimate horror.  Three hours in a middle seat, meant for cargo, not human beings.

But not me.  I’m fully caffeinated.  And I am wired!  Over the next three hours I have to figure out whether the business I’ve visited that week warrants investment.  And I’m too sure how to get that done.

Settling under the glow of the orange-ish overhead, I started to sketch.  What appeared on my yellow pad was the back of a #10 envelope.

At that moment I started to see patterns.  For doing things, in addition to what the business always had done for its customers, that would help them with a fear, or make them fee better about themselves, and build their loyalty.  Turning them from average customers into zealots.  Who might attract others.

The first trip ‘round the envelope didn’t make sense.  Too grandiose a scheme for the resources.  But it was a solid step forward.  By the fourth circuit through the logic I had something great.  A way of looking at the business that was fresh, optimistic and that no one else had imagined.

We bought the business, executed the Back of the Envelope scheme and sold it three years later with a gain on sale, due to performance improvement, that was more than expected.

But most rewarding?  The people running the business had turned into zealots too.  They looked forward to getting to work.  They gave their all, every day.  And they felt like their work was more than work.  An enriching part of their lives.  More of a service.  And a calling.

You can do the same thing.  With the same results.  Starting on the Back of an Envelope!

Be sure and tune in tomorrow for our podcast with Dick Cross, 9x turnaround CEO and author of the Book, Just Run It!