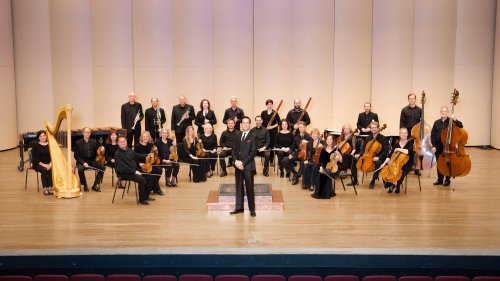 The Indianapolis Chamber Orchestra, or ICO, was more than halfway through their season when the novel coronavirus brought music-as-usual to a screeching halt. “It stopped us in our tracks,” explains Elaine Eckhart, the orchestra’s executive director. For 35 seasons, the ICO has performed music created for the small orchestra. They’ve developed a national reputation for expanding outside historical compositions from heavyweight composers like Mozart, Bach, and Vivaldi and commissioning new works by living composers.

So when a virus brought the possibility of live music performance to a halt, the ICO had to adapt.

How Can You Have an Orchestral Concert Without an Audience?

With these new constraints, the ICO decided to pivot to video content. In addition to the weekly WFYI radio broadcast (it’s on Monday nights if you want to check it out), they’ve added a 20-minute video broadcast Thursday night. The series, Mocktails and Masterpieces, provides a video performance with bonus commentary on the ICO’s social media channels.

The video series has allowed the ICO to maintain their relationship with patrons, preserve the specialness that comes with appointment viewing, and expand access to an audience that is largely stuck at home. The shift didn’t happen overnight. The combination of early optimism for how long the shutdowns would last and novel tech requirements took about 6 weeks to tackle. Elaine explains, “We’re kind of learning as we go, but it’s happening.”

Planning for Next Season

Next season may present a bigger challenge for the orchestra than even this one. Elaine expects that audiences will be slow to come back. With an older core audience, some of them may be inclined to send money and stay away. For that reason, she expects that video content will remain a vital part of the orchestra’s offerings, but they’re determined to find a way to bring live orchestra music to Indianapolis—whatever social distancing constraints they must face.

How a PPP Loan Has Helped the Orchestra Survive

“It’s really important that we got this,” Elaine says of her PPP loan. “I betcha a million dollars our PPP loan is probably one of the smallest… but it’s not small to us. It has made a big difference in our ability to keep our organization whole, to be able to pay our staff and musicians and not erode any kind of reserves we have.”

Like many, Elaine’s loan experience started out frustrating. “I had an application ready to go the morning of the first day. My application was already done when they changed the application,” she says, echoing the vexation many experienced when the SBA issued guidance that changed application requirements the night before applications first opened. But the ICO got it done in the end. And the annoyance? That’s par for the course, as Elaine sees it. “That’s what happens when a situation is new and unprecedented. There are no routines and no protocols set up.”

Like many people at the helm of small businesses and nonprofits across America, Elaine is a survivor. She’s determined to keep putting one foot in front of the other. There’s going to be a tomorrow as she sees it, and the trick is just figuring out how to find the ICO’s place in it. For her, the key is coming back to the orchestra’s mission: live music. “I like what we do, and I think our product has value,” she says. “So I just can’t really imagine life without it.”