Home Don't Use Harnessing Your Dreams Can Unleash Their True Power

Harnessing Your Dreams Can Unleash Their True Power 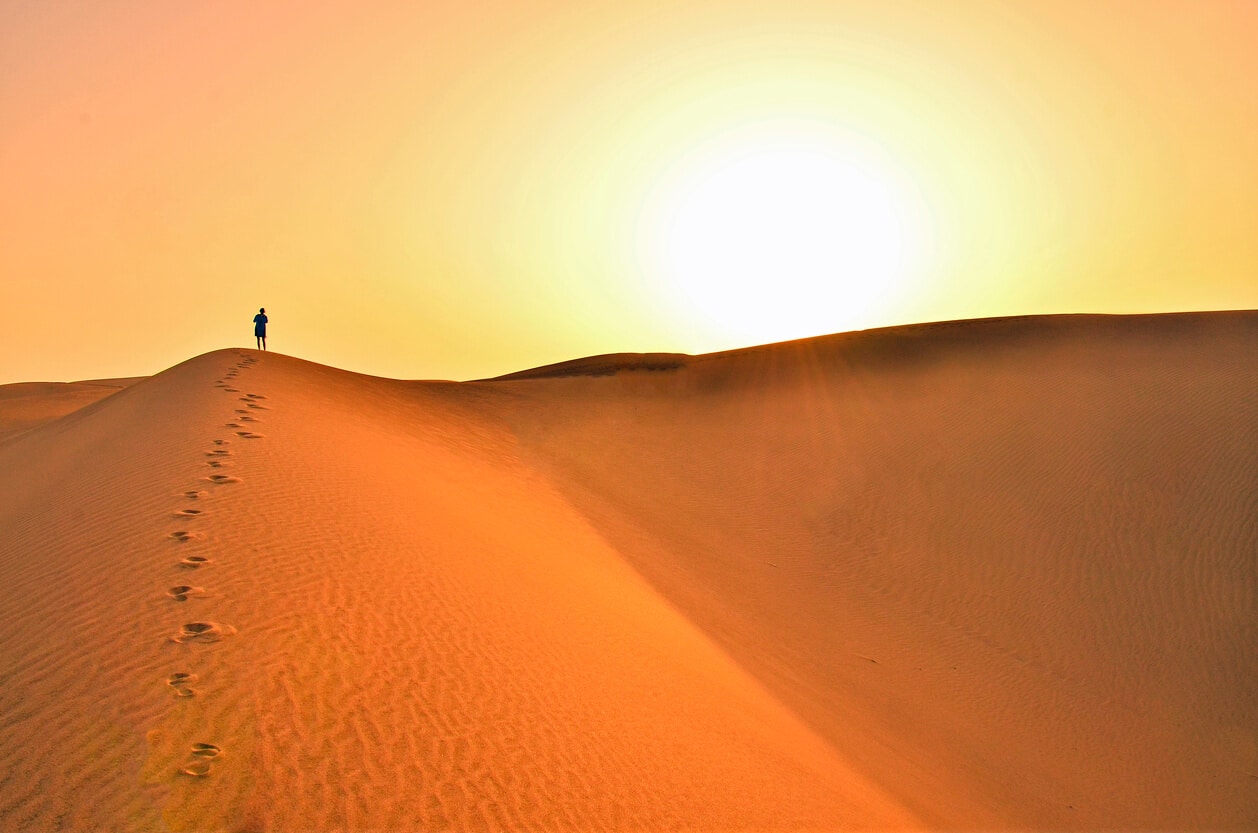 Years ago, a friend of mine backpacked across Morocco. This woman, Amber, is among the toughest people I’ve ever known. She’s physically strong, intensely driven, and possesses a level of mental fortitude that borders on machine-like.

As she considered her route, Amber settled on 2 options. First, she could follow the towns. Each day would involve lots of hiking, but she’d usually reach a waypoint by nightfall. The advantage with this approach would be the consistent availability of food and water, plus the option of a bed on nights when she didn’t feel like camping out.

The second option was a massive trek across open desert. There would be few towns along the way, meaning resources would be limited. But the reward would be knowing that she’d conquered the elements and done something truly special.

You can probably guess which option Amber chose. And as she made her way across miles upon miles of barren desert, she began to regret her ambitious decision. Turns out that access to food and water can’t be overrated. And the prospect of a bed to sleep in becomes exponentially more appealing after a month of lying on the sand.

Amber eventually reached her destination, but she’d lost 42 pounds. More importantly, she’d lost her spark. Those brutal days in the desert punished her instead of enlightening her. If she’d taken the more realistic route, she would have benefited greatly from daily arrivals and rewards. And her destination would’ve ultimately been the same.

Appreciating the Here and Now

As entrepreneurs, many of us chase the same glory that Amber did on the scorching sands of Morocco. We want to punish ourselves in order to achieve some epic prize. You’ve probably heard small business mantras such as “rise and grind” or “sleep is for losers.”

The problem is that this “go big or go home” attitude can set you up for something worse than failure, which is disappointment. Not reaching goals is an important part of our development in life. The problems begin when we are too drained or disillusioned to learn from the experience—then failure becomes the only takeaway.

“Sure, audacious goals can be energizing,” says business expert Arthur C. Brooks. “But a fixation on them can lead to big disappointments. Worse, when your eyes are constantly on the horizon, you can miss what is right in front of you. For happiness, we need a better approach to setting goals—one that sets us up for success in life and lets us enjoy the here and now.”

So does this mean we should lower our sights in order to succeed? Not necessarily. We should still identify ambitious destinations that exhilarate and inspire us—but we need to chart a manageable course that includes a series of attainable goals for reaching them. Don’t go for the all-or-nothing moonshot when a 3-stage rocket would be the more reasonable way to go. As each rocket has served its purpose and lifted you closer to the moon, you’ll feel a sense of accomplishment. And the excitement builds as the next rocket kicks in and propels you further on the journey.

The most important thing: don’t let your intended destination consume you. This is actually a major problem in the business world. Research shows that goals based upon the here and now, such as personal relationships, personal development, or community impact, will increase your happiness. These are actionable areas of your life that relate to the most meaningful aspects of being a human.

But goals focused on money and fame often hurt our level of happiness. And they have a nasty habit of damaging our self-perceptions.

But Aren’t We Supposed to Dream Big?

Perhaps that previous paragraph was a bit of a rude awakening. We’re conditioned as entrepreneurs to chase dreams and swing for the fences. So why would we ever want to curtail our ambitions? After all, nobody ever talks about the “American Manageable Goal.” This is a nation founded on dreams.

The fact is, if you’re dreaming of success, your best chance for experiencing it comes from seeking out the waypoints that will provide you with a safe and satisfying journey.

“Setting short-term, realistic goals has been shown to start a reinforcing mechanism of success and happiness, provided these goals fit with our values and aren’t imposed on us by others,” explains Brooks. “For example, in one 2001 study, college students who set academic performance goals for the year that matched their intrinsic motivations were more successful than those who didn’t, leading to higher well-being and confidence. This set them up for more goal setting, more success and happiness…Focusing on long-term, difficult-to-achieve goals, in contrast, is risky because you’re less likely to accomplish them. Disappointment creates pessimism and can provoke depressive symptoms. Therefore, goal-setting—especially for audacious goals that are unlikely to be met, or even ordinary goals during times like the present—might lead to a lot more unhappiness than happiness.”

So keep your big dreams—but make sure your aspirations align with your motivations and abilities. There are no ribbons handed out for coming up with the most audacious goal ever. You won’t be featured in the Harvard Business Review for your boundless pluck. Instead, seek intrinsic rewards and growth through the consistent achievement of the goals that matter most to you because achieving dreams takes incremental steps in the waking world.

No discussion of dreams is complete without addressing the topic of your passions. There’s no doubt that the happiest small business owners have a passion for what they do. They’ve chosen a business that complements their intrinsic priorities and thus find satisfaction in their work.

But problems arise when the passion quotient overrides the function of your business. For example, I’m passionate about introducing the younger generation to fishing. I love taking my own children out on the river and find joy in helping their friends learn how to tie a fly and land their first trout.

I actually started a business called Discover Fishing. While the simple process of setting up the business was fulfilling, I soon realized that I didn’t have a feasible business model. The passion was there, but the function was not.

So I took the lessons I’d learned from Discover Fishing and applied them to my next business idea—and because this new business solved problems for customers, it has thrived. I often find joy in what I’m doing, and it’s awesome that a total passion, such as Discover Fishing, actually served as a stepping stone to a more sustainable business.

“The word ‘passion’ has become as pervasive as startup clichés,” says entrepreneurial guru Aytekin Tank. “Everyone from coders to roofers wax on about their passion, but ultimately, the world’s most successful companies solve problems. Entrepreneur and Y Combinator cofounder Paul Graham says the best startup ideas represent something the founder wants. It should be something that people want and that the founder can build themselves (even as a prototype). Starting with something people already want and need puts you miles ahead of passion.”

Again, we return to the importance of alignment. Just as your goals must resonate with the meaningful aspects of your life to bring happiness, your business must align with consumer demand if it is to succeed. If you aren’t solving people’s problems, you’re only going to create more of them for yourself.

Balance Your Hustle and Realize Your Dreams

My friend, Amber, is the epitome of hustle. She outworks others on a daily basis. And she’s been known to tackle business opportunities with the same intensity that drove her across the deserts of Morocco.

Outworking and outperforming are 2 separate things, however. And it’s become apparent in Amber’s life that she accomplishes the most when she dials back the pain and adds healthy doses of serotonin.

Similarly, we all will benefit from charting a course for our dreams rather than letting them drive us into the wilderness. Make no mistake—manageable goals aren’t a concession, and it still takes hustle to go from Point A to Point B. And it’s often the only way we’re ever going to reach Point G.

So throw out the stupid sentiments such as “I’d rather hustle 24/7 than work 9 to 5.” Rather than being for losers, sleep is for people who care enough about reaching their destination that they supply their body with the fuel to get there. It’s sad that our culture often forgoes the source of dreams in the very pursuit of them.

Take time to consider new ways that you can empower your dreams through the here and now. Perhaps you want to develop better communication skills or learn to use a new software. Maybe you want to learn to control your anger or volunteer more in your city.

The goals vary, but the results remain constant. As long as you’re finding ways to stretch yourself in meaningful ways, you’ll feel happiness—and each step will get you closer to your ultimate goal.