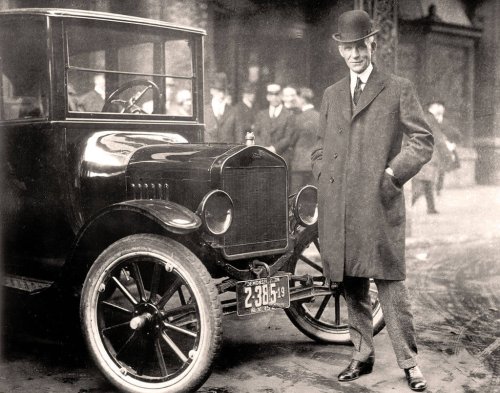 You’ve probably heard jokes about the reliability of Ford vehicles. There are lots of reverse acronyms floating around out there, such as “Fix Or Repair Daily,” “Fast Only Rolling Downhill,” “Fails On Race Day,” or “Found On Road Dead.”

But do people really think Ford cars are inferior? Some of the most popular cars on earth have rolled out of Ford factories, so there don’t seem to be any wide-scale issues. Perhaps the derisive jokes originate from jealous folks working over at Chevy or Hyundai.

The Ford Motor Company never would’ve existed if it hadn’t been for Henry Ford’s penchant for tinkering with machines. His first gas-powered vehicle was called the Quadricycle, which he created in an old shed jam-packed with gears, tubes, and other gizmos.

Five years after establishing the Ford Motor Company, Mr. Ford was ready to release his Model T on the market. Reaching that point required ingenuity and zeal. Using 1908’s top technology, Ford managed to invent the first moving assembly line. The company’s innovations meant that it only took about 45 minutes to complete each Model T, with a new car rolling off the line every minute or so. Ultimately, they produced over 15 million of these “Tin Lizzies.”

“The Model T was actually affordable, and it became so popular at one point that a majority of Americans owned one, directly helping rural Americans become more connected with the rest of the country and leading to the numbered highway system,” says History.com. “The manufacturing needs of the Model T went hand-in-hand with Ford’s revolutionary modernization of the manufacturing process.”

While Ford doesn’t dominate the market like it once did, it still sells millions of cars each year. And the brilliance of Henry Ford continues to play a role in the company’s methods and products.

Even if you prefer Honda, Toyota, Subaru, Tesla, or some other manufacturer to Ford, it’s hard to deny the brilliance of its founder. Let’s look at some of Henry Ford’s business advice to see what it can offer modern entrepreneurs.

“Education is preeminently a matter of quality, not amount.”

This quote teaches us that it doesn’t matter what’s in your past. What matters is that you have a great idea and the expertise to bring it to life.

“The short successes that can be gained in a brief time and without difficulty are not worth much.”

No entrepreneur sets out to create a flash-in-the-pan company—we all want to build businesses that become legacies. So don’t shy away from challenges and failure, as they’re both part of the long game.

Henry Ford was a creator of the first order. He understood that all the money and resources in the world can’t produce exceptional results—only the right person can. Your goal should be to be that type of person.

“Most people think that faith means believing something; more often it means trying something, giving it a chance to prove itself.”

The best small businesses are founded on risks. If the outcome of each of your decisions was always a guaranteed success, all your competitors would be making the exact same decisions, and it’d be impossible to stand out. Don’t be afraid to come up with new ideas that deserve the chance to prove themselves.

“Be ready to revise any system, scrap any method, abandon any theory, if the success of the job requires it.”

There will inevitably be times when you pursue a bold idea and it fails to deliver. Such is the nature of innovation. Just make sure to move on when it’s time, rather than clinging to your precious idea and compounding the negative impacts.

“Many people are busy trying to find better ways of doing things that should not have to be done at all. There is no progress in merely finding a better way to do a useless thing.”

The life of a business owner often feels like a crash course in multitasking, not unlike the amazing plate-spinning acrobats seen in this video. By focusing your efforts where they’ll have the most impact, you can usually save time and secure a better ROI.

“Businesses that grow by development and improvement do not die.”

As the old saying goes, you’re either green and growing or you’re ripe and rotting. In order to keep your business healthy, you’ll need a mindset of improvement.

By applying the wise words of Henry Ford, you can put yourself on the path of innovation and progress. It’s no coincidence that the forward-thinking Ford installed assembly lines in his factories that literally never stopped moving. Your business probably won’t ever feature an assembly line, but it can certainly benefit from the idea of constantly marching toward greatness.