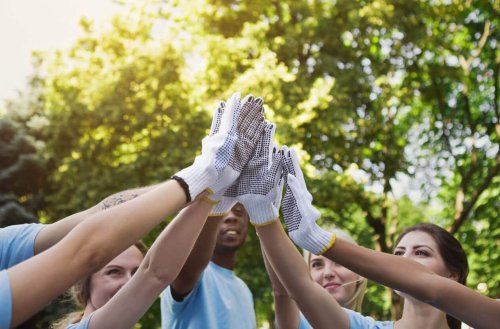 It seems like each day of 2020 brings new reports of trouble and turmoil, causing some people to take the understandable approach of deactivating social media and avoiding the news. But this strategy can’t completely insulate you from the negative aspects of our world, as they’ll still permeate your personal and professional life.

Perhaps the better approach is to counterbalance, or even drown out, the negative with positive. There are plenty of uplifting stories of businesses and individuals standing up for what’s right and helping those in need: those who truly rise above the rest to make a difference.

“The ability to inspire is one of the single most important leadership skills that separates great leaders from average ones,” explains Forbes. “While there are plenty of admirable bosses, there are only a handful of leaders who are able to infuse energy, passion, and connection into their actions and behaviors, coupled with a clear vision, mission, and commitment to integrity that guides them in everything they do to make the world a better place.”

Let’s take a look at some leaders who are balancing financial success with a strong moral compass. Here are 6 prime examples:

Barra is an innovator in the automobile industry, investing massive sums of money in autonomous vehicles, electric drive technology, and ridesharing. More importantly, she is one of the few leaders who is taking gender-linked pay disparities seriously. There’s a small number of international businesses that don’t have a gender pay gap, and General Motors is a key member of the club.

“If we win the hearts and minds of employees, we’re going to have better business success.”

Michael Scott may have a mug that says “World’s Best Boss,” but Yuan actually has some claim to that distinction: Glassdoor named him the best US CEO to work for in 2018. How does one achieve this title? Yuan treats his customers with respect, takes care of his employees, and constantly seeks to improve his company’s offerings.

“If we make our customers happy, we’ll be happy.”

Saujani is another brilliant leader who works diligently to create better opportunities for women. She got her start as an attorney and now leads Girls Who Code, a nonprofit organization that teaches girls critical coding skills. Nearly 100,000 girls have gotten their coding chops from the organization. Look no further than Saujani if you want to learn from an activist who is tackling a problem with edifying intensity.

“One of the hallmarks of happiness is having close, meaningful connections with others. But keeping up a facade of having it all together keeps us isolated because it keeps us from forging real, honest, deep relationships where we can fully be ourselves and feel accepted exactly as we are.”

Sutskever is the kind of visionary who not only views the world through rose-colored glasses but also has the capabilities to truly make the world more rose-colored. After leaving Google in 2015, he’s made a name for himself at OpenAI by constantly seeking out new ways for AI to help the world.

“I think, and many people think, that full human-level AI might perhaps be invented in some number of decades and will obviously have a huge, inconceivable impact on society.”

Here’s another business leader who gets high praise based on employee reviews from Glassdoor. Weiner has been rated one of the country’s best CEOs, a ranking that’s largely based on his belief in compassionate leadership. He has a daily tradition of spending at least an hour and a half mentoring others or chatting with colleagues.

Humility can be hard to find in the executive world, but Mickos learned it through experience. After being fired from his leadership role at a major software company, he’s dedicated himself to understanding his employees and improving his skills. Today, he leads a team of white-hat hackers who help businesses improve their cybersecurity and avoid breaches from criminals.

“Customers can try on the shoes before they buy them. The model just makes sense.”

There you have it: 6 individuals who strive for worthy business goals and take care of people along the way. This world may be frightening at times, but there are plenty of positive examples out there. You just need to look for them.