How to Celebrate Wins and Embrace Challenges As an Entrepreneur

Entrepreneurs aren’t known for their ability to stop and smell the roses. A fast-paced, forward-looking lifestyle is part of the gig, but it can be hard on your employees and hard for you to sustain personally. That’s why I’ve learned to celebrate what I call “high-five moments,” whether for my company as a whole or for individuals within the company.

Business ownership, like life, comes with plenty of ups and downs. Recognizing successes and making the most of every win, big or small, goes a long way toward building a strong company culture and a strong business in general.

This is one of my key learnings, and something I talked about recently with David Ralph, host of Join Up Dots. David is a business coach who runs a crazy successful podcast with thousands of episodes about creating a blueprint for success. I spoke with David about some exciting Lendio news, including being named a top workplace by Inc. magazine and a finalist for EY’s Entrepreneur of the Year award in the Utah region. We’ve worked to make these stop-and-smell-the-roses moments for Lendio—moments where we slow down and celebrate recognitions as a team. 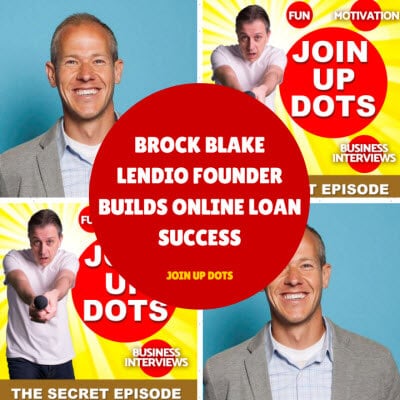 Business ownership is never all about winning though, and Lendio has had its fair share of struggles over the years. David and I chatted in detail about some of those times, including a pivotal time when we ran out of cash and couldn’t make payroll, as well as some other times when I felt like there was no light at the end of the tunnel.

We also addressed a common challenge faced by many entrepreneurs. How do you know whether you should stay the course or cut your losses and move on? I believe almost every business owner will ask that question at some point in the journey. It’s a hard question to answer, and I think far too many new business owners quit when the going gets tough. I’m grateful to have been surrounded early on by a dedicated, smart team that persevered together and had faith we could come out on the other side. Entrepreneurship is a fight, but it’s worth it.

Listen to the full Join Up Dots episode online or download via iTunes.

Brock Blake is the CEO and co-founder of Lendio, the leading small business finance solutions provider in the U.S. Brock believes that access to capital should be simpler and quicker for small business owners, and he’s built a successful company around solving this problem. Brock leads the team that has facilitated over $10B in loans to small businesses. An Inc. 500 CEO, national keynote speaker, Forbes columnist, and Utah’s Emerging Executive of the Year, Brock’s dedication extends far beyond the boardroom. He has shaped a superior company culture with a humble and hungry team that is passionate about driving results and giving back. For every new loan facilitated on Lendio’s marketplace platform, Lendio Gives, an employee contribution and employer matching program, provides a microloan to a low-income entrepreneur around the world through Kiva.org.