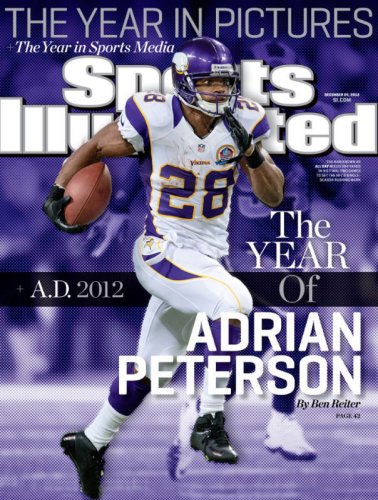 Several weeks ago I wrote about being on deadline and how reporters are constantly driven by deadlines.  In PR, and in any aspect of life, building trust is critical to any relationship.

The other day I was cleaning my desk and came across the December 24, 2012 issue of Sports Illustrated.  This issue is the Year in Pictures issue and highlighted the sports year of 2012.  Minnesota Vikings running back Adrian Peterson, the MVP of the 2012 season, graced the cover. The magazine included a feature on Peterson, specifically his historical rushing year after a serious knee injury.

On December 24, 2011, in a game at FedEx Field against the Washington Redskins, Peterson, while running, planted his left leg at the precise moment a defender dove into the same leg forcing it to bend in a way that tore his Anterior Cruciate Ligament (ACL) and ruptured his Medial Collaterate Ligament (MCL).  An injury like this to a running back can be career threatening and usually takes a year or more to come back from. eterson goes by the initials “AD” for a nickname his father gave him as a young boy, “All Day”.  His dad called him “All Day” because he was able to work and paly so hard all day long without tiring.  This tenacity and energy played into his rehab after the knee injury and subsequent surgery.

Peterson came back in 263 days and played every game of the 2012 season.  Not only did Peterson play every game, he rushed for a career high and came within nine yards of breaking the all-time single season rushing record and was named Most Valuable Player (MVP).

After finding the magazine in my desk and re-reading about Peterson’s incredible season, what struck me most was his commitment to keeping his word to a fan.  Before the game started on December 24th Peterson noticed a kid in the stands with his jersey and a sign that said all he wanted for Christmas was Peterson’s autograph.

Peterson saw the kid and told him, “I’ll get you after the game.  I promise.  I’ll get you.”

After his injury, as he lay in the locker room with his knee in a brace, Peterson asked the team’s Vice President of Communications to get the jersey from the kid so he could sign it and keep his promise. Peterson wears number 28 and on the number two he wrote, Merry Christmas 2011 and signed it.  On the number eight he wrote, All Day/God Bless.

It would have been easy for Peterson to forget about the kid and his promise.  In fact, nobody would have faulted him for it given the devastating injury he suffered during the game.  It’s easy to commit to something and not deliver.  However, when you deliver and keep your word it builds trust and people know they can depend on you.

The same can be said of working with the media.  When we deliver what we promise it builds trust and helps us become a trusted source for the media moving forward.  Once trust is established, the opportunities grow and increase.

Listed below are five steps to build trust and become a trusted resource for the media and for any other relationship, personal or professional:

The ability to stay true to your word is essential to building trust and being somebody others can rely on “All Day.”  By following these five steps you’ll establish yourself as a trusted resource for those you work with.