Oh Yeah? Well My Dad Can Beat Up Your Dad 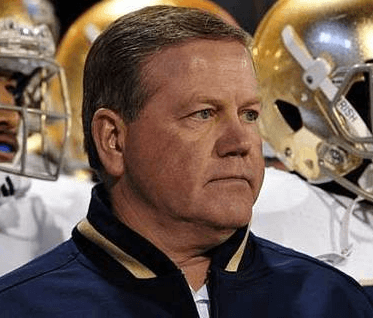 I recently wrote about the importance of implementing a corporate spokesperson policy. There are a number of aspects that go into conducting a successful interview for appointed spokespeople, but one aspect I’d like to highlight in this blog entry is defusing a difficult or uncomfortable question or situation with humor.  I bring this up because of a recent interview I heard with Brady Hoke, the head coach of the University of Michigan’s football team.

Hoke’s Michigan Wolverines have played the Notre Dame football team 40 times since 1887.  Granted, Hoke hasn’t been the coach for all of these games, but he does understand the tradition behind the series and the significance of playing Notre Dame every year.

On September 1, 2013 Brian Kelly, Notre Dame’s head coach since December 2009, said, “”I really haven’t seen it as one of those historic, traditional Notre Dame rivalries. I’ve seen it as just one of those great football games that Notre Dame has played. For me, I’ve been in Michigan a long time, I’ve always felt the Notre Dame-Michigan game was a big regional game. But in the Notre Dame history books, this game has (been) played, but obviously there have been some years where it hasn’t been played for a number of years.”

The reasons behind Kelly’s comments are unclear.  Perhaps it’s because the last game scheduled in this series is 2014.

Whatever the reason, two days later, on September 3, 2013 after hearing it from fans, Kelly changed his tune, “It’s a great and historical rivalry that we’ll be playing this Saturday,” Kelly said. “So let’s get that out of the way right away so we don’t have to answer any more questions about this rivalry. We’re excited about the game, excited about playing it. This will be decided by the players on the field and the preparation that goes along with it. So we can stick to that and dispense the nonsense.”

Clearly he seems irritated.  As I heard about this situation and read his comments, I wanted to tell him, “You started this with your original comments. Don’t get mad and threaten to take your ball home just because you’re being called on something you said.”

After hearing Kelly’s remarks, one might expect Hoke and his fellow coaches and players to be upset and to even express some anger and frustration towards Kelly and his Fighting Irish.  That’s normally the reaction and the course of action from an offended competitor.

In these types of situations, when the questions get tough it would be easy to take a cheap shot at a rival.  It’s easy to follow the natural instincts and do just that.  However, I advise my clients to avoid falling into that trap.  By responding emotionally when angry you run the risk of saying something to ignite the fire, keep the controversy brewing and extend the shelf life of a negative story.

Hoke’s initial response was to express his opinion. “‘GameDay’ has been here six times for this football game,” Hoke said. “That’s pretty significant, if they’re coming, whether it’s on this campus or in South Bend. So, it must have some sort of national appeal.”

In these types of situations, I recommend using humor to diffuse the situation. Sensing that this situation and story could get out of hand quickly, as the questions continued the next day, Hoke, a former linebacker at Ball Stat e University invoked humor to diffuse the situation.   When asked again about Kelly’s comments, Hoke responded with, “Everyone’s got an opinion.  Some people think I’m skinny.”

It should be noted that Hoke is a man of large stature.

Hoke’s response effectively ended the questioning for him and in addition to getting a good laugh from everybody that heard his response. He also made it very clear he didn’t agree with Kelly’s assessment of the rivalry.  His comments made him look great in the eyes of the media, Michigan fans and college football fans everywhere.  It also enabled him to avoid adding fuel to the fire by saying something in the heat of the moment that may have only served to intensify the scrutiny and increase the discussion.

It’s clear he disagrees with Kelly’s assessment of the rivalry.  Behind closed doors Hoke is probably using Kelly’s comments as bulletin board material to psych his team up for the game. However, unlike Kelly his comments have allowed him to avoid making a quick coarse correction and castigating the media with the venom of, “so we can stick to that and dispense the nonsense.”

A little humor when trying to answer tough questions can go a long way to diffusing potential controversy in an interview.  Through humor you can make your point and endear yourself to the media while rising above the noise, name-calling and mud slinging.