Lendio no longer supports Internet Explorer. To improve your browsing experience, we recommend you use an alternative service such as Google Chrome, Microsoft Edge, or Firefox.

Ranking of States Based on Approval Rates and Loan Sizes 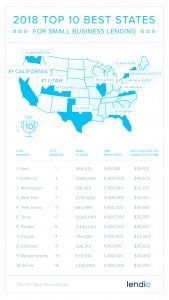 According to a Federal Reserve Bank of Cleveland report, nearly half of small businesses need additional funding each year; however, since 2008, it’s been a challenge for small business owners to access financial capital. Continued growth and innovation in online lending platforms is transforming the funding landscape.

Pudding on Smiles, owned by Michael and Kendra Sanders of Dallas, Texas, is one of the many success stories to come from better access to growth capital for small businesses. They began their online pudding shop with around $400 of their own cash. “We didn’t seek out opportunities because we didn’t have the production capacity,” said Michael Sanders. “Getting funding in place has helped us to really start expanding our business. We hope to have a larger national and potentially global brand in the near future.”

“Lack of financing makes it hard for small business owners to focus on the big picture,” said Brock Blake, CEO and founder of Lendio. “This list showcases how online lending technology is giving entrepreneurs the freedom to create, innovate and succeed.”

In 2017, Lendio helped facilitate more than $300 million in funding in all 50 states, a 62 percent annual increase in loans originated through its platform. Loans were made to entrepreneurs in diverse industries including construction, retail, restaurants and health care.

The top 10 states ranking is based on a calculation of several key indicators, including approval rates and loan sizes, from among thousands of Lendio’s customers from April through March each year. More information about the 2017 and 2016 top 10 states for small business lending, including the average loan size on the Lendio platform, can be found at www.lendio.com.

Lendio is the nation’s leading small business finance solution provider. With its diverse network of lenders, Lendio enables small business owners to apply for multiple loan products with a single application. To date, Lendio has facilitated more than 300,000 small business loans for more than $11.8 billion in total funding, including $9.8 billion in PPP loan approvals as part of government COVID-19 relief. Lendio is a values-driven organization striving to provide equal access to capital to underserved communities and America’s smallest businesses. For every new marketplace loan Lendio facilitates, Lendio Gives—an employee-contribution and employer-matching fund—provides a microloan to a low-income entrepreneur around the world. More information about Lendio is available at www.lendio.com.