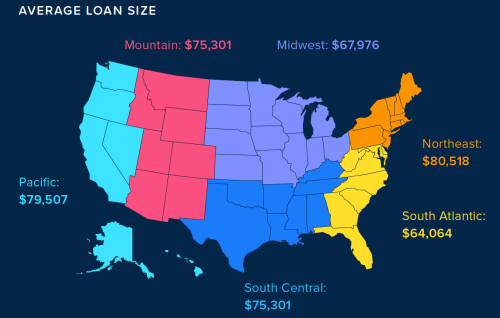 When the COVID-19 pandemic began taking its toll in the United States, local governments across the country enacted mandated closures. As more and more of these closures and social distancing took root, it was all but sure that small businesses, and the people they employ, would be among the first and hardest hit financially.

Some financial relief came in late March when the federal government approved the CARES Act, kicking off the Paycheck Protection Program (PPP)—a program aimed at keeping employees at work and the doors of small businesses open. Through PPP loans, qualified small businesses can receive up to 2.5x their monthly payroll, much of which can be forgiven when used on the right expenses.

The SBA and its private partners have experienced an unprecedented demand for this emergency relief. Through partnerships with 300 lenders across the country, Lendio has facilitated 100,000 PPP loan approvals for a total of $8 billion to date. For context, prior to participating in the PPP, Lendio had facilitated $2 billion in business loans since its inception in 2011. Additionally, PPP loans facilitated through Lendio were for some of the smallest businesses in the nation. The average PPP loan size on the Lendio platform is $73,000 compared to the national average of around $107,000.

In early May 2020, Congress approved the second round of PPP funding totaling $350 billion. In this round, funds went to smaller businesses and more sole proprietors, many of whom struggled in the first round to secure SBA approvals.

In round one of the PPP, businesses with existing SBA lender relationships were more likely to secure a loan approval, leaving smaller businesses and those in underserved segments at a disadvantage. This is reflected in the average loan size on the Lendio platform, where many of the nation’s smallest businesses came to secure funds.

Overall, the regional distribution of loans through the Lendio platform shifted during the PPP. The South Central and Pacific regions both saw a 5% increase in borrowers compared to 2019. The number of borrowers in the North East dropped by 6% compared to 2019.

The effects of the pandemic on minorities and underserved communities are still being studied, but it is widely understood that business owners in these populations have historically experienced disparities in access to capital and continue to do so throughout the PPP.

With regard to access to capital, women-owned businesses have long been underserved. In all of 2019, women represented only 23% of small business loan applicants across the country. During the PPP, however, women business owners make up 32% of applicants. The Pacific region is seeing the highest percentage of female borrowers, bolstered by Hawaii, which has the second-highest percentage of female borrowers in the nation (42%). By industry, social assistance, education, travel agencies, government/public services, and healthcare have the highest number of female borrowers.

Lendio facilitates loans in all fifty states plus the District of Columbia and the U.S. Virgin Islands. Across the country, the split between borrowers in urban, suburban, and rural zip codes is relatively evenly distributed. During the PPP, 30% of loans have gone to businesses in urban areas, 28% to suburban areas, and 39% to rural.

*Note, Lendio does not require declarations of gender, ethnicity, or income for PPP loans.

When mandated shutdowns were put in place, the effects on small businesses varied by industry. Restaurants, retail, and shops that require close contact were hit particularly hard. Businesses in construction, restaurants, healthcare, and retail have received the most loans compared to other industries.

Restaurants were among the first businesses forced to pivot or close, and in many areas will be among the last to be able to open to full capacity. Local restaurants also have some of the largest staffs, which equates to the most layoffs or furloughs when times get tough. PPP loans to date have preserved more jobs in the restaurant sector than any other, with nearly 31,501 employees benefitting from relief funds.

Healthcare businesses, which can range from physicians’ offices to spas and salons, rank second for the amount of relief approvals ($168,344,093), just behind construction businesses. The healthcare industry also ranks second, behind restaurants, for the most jobs preserved (22,838).

Retail small businesses, like restaurants, were among the first and hardest hit by shutdowns. As more consumers took to online retail and delivery-based businesses, Main Street storefronts saw drops in foot traffic and declines in revenue. Retail ranks fifth for the number of PPP loan approvals by industry, sixth for total loan volume by industry, and fifth for the number of jobs preserved in an industry to date.

Where many large financial institutions prioritized their existing customers for PPP loans, other lenders, including Lendio’s partners, opened their doors to business owners from all walks of life. Unfortunately, the challenges for small business owners do not end when they receive a PPP loan and great economic uncertainty remains. Many business owners are now navigating the loan forgiveness process, and others continue to seek financial assistance while operating on thin margins. As demonstrated throughout the program to date, the need for relief funding is unprecedented and will likely continue as small business owners seek to reopen and rebuild in the coming months.