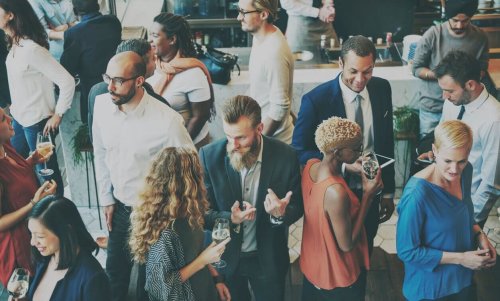 Expanding and utilizing your network is a crucial part of growing your business, but it can also be daunting. This is especially true if you are new to the networking game.

But don’t fret – networking is a skill that anyone can learn. So, to help you walk into your next networking event with a little more confidence and pizzazz, here are 11 simple tips:

Early birds get the worm in the networking world. Why? Because before an event has started, most people aren’t settled into groups or conversations. It’s a calmer, quieter atmosphere where people are more approachable. Get there early and strike up a conversation with someone who’s wandering around waiting for the event to start. You may find what you’re looking for before the event organizer even taps the microphone.

Don’t think you have to go and make 50 contacts in one day. It’s much better to make a few really good contacts than a bunch of superficial ones. The better the contact, the more likely it will pan out.

Once a networking event is in full swing, people will intermittently go to the bar to grab a drink. It’s a place where people are more relaxed and more willing to chat. You don’t have to be drinking to plant yourself at or near the bar – just hang out and talk to the people around you.

Most people like to talk about food and travel. Think of a few questions you might ask to get the other person talking. It can be as simple as, “know any good restaurants around here?”

Once you get someone talking, make sure you focus in on what he or she says. For example, if someone gives you a few restaurant recommendations and you just say, “cool, I’ll have to check those out,” the other person is going to think you weren’t really listening. It would be much better to instead ask a follow-up question that refers to the answer they gave you. Show people you’re interested in their ideas and opinions and they’ll like you. Liking you is a crucial step in getting a person to trust you – and eventually bring you business.

When conversation naturally flows to the topic of business, be careful not to slip into sales mode. Networking is about building relationships, so be fun and informal. People generally want to partner with those whose company they enjoy.

Showing the other person that you’re passionate about what you do is a great way to build a connection. Tell the story of what inspired your business. Win people over with your positivity and excitement.

When you’re finished talking, take a moment to jot down a few notes about the exchange. That way, you can refer to the conversation when you do your round of follow-up calls.

Smiles disarm others and help you have a friendly affect. It’s a simple way to improve your networking game that actually works.

Organizers are a great resource, as they usually know quite a few people at the event. They’ll be able to connect you with the kind of people you’re looking for.

Whether talking to the event organizer or anyone else, if they suggest someone for you to talk to, ask to be introduced. This will help you build credibility in new groups and allow you to hop right into the conversation.