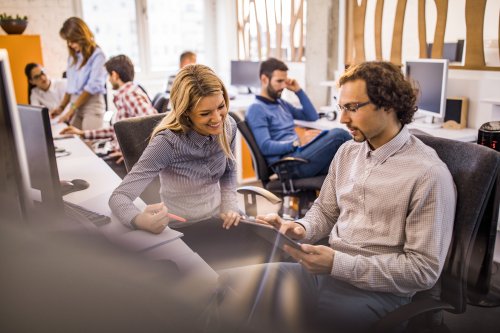 The Transformative Power of Financial Technology

We’re living in a wild world. You can order unicorn cocktail napkins and have them delivered the same day (though we should all probably be more mindful about our use of Amazon’s same- and next-day shipping). Cabs have fallen out in favor of rideshares you can order straight from your phone. Tech has changed virtually everything about the way that we live, including our finances.

Fintech, which is short for financial technology, has the power to change the way financial systems operate. To use the most ubiquitous tech buzzword, fintech companies have their sights set on “disrupting” the finance industry and ushering in an era of financial inclusion.

Of course, fintech, like all tech, is only as good as the people creating it. It has the same vulnerability to the blindspots of its creators. We have a duty to hold it accountable—and we should. Today, we’re looking at what fintech can achieve at its best. Because it’s always easier to hold something accountable when you know where you want it to go.

One of the reasons we care so much about small business owners is because we know they have the (historically untapped) potential to fuel the economy. Thanks directly to fintech funding, over 350,000 jobs have been created, totaling $12.6 billion in wages contributed to the US economy.

Banking on the Unbanked

An estimated 25% of US households are unbanked or underbanked. That number gets even higher when you look at unbanked populations on a global scale. If you’re new to the term, unbanked refers to people who don’t use banks or other financial institutions, and 31% of the global population fits that description.

The same way there are food deserts (areas where people don’t have access to healthy food, grocery stores, etc.), there have been banking deserts—areas where individuals have remained unbanked because it’s too difficult to access a bank location. Thanks to the prevalence of smartphones, fintech has the potential to reach these populations. With an app, you can now deposit checks directly to an account and manage funds from your phone. The reduction in cash-reliance invites individuals into other aspects of the professional economy as well. Unbanked individuals are less likely to have insurance, for example, or a monthly cell phone plan (as opposed to a prepaid plan that can be paid for with cash).

Kiva, a San Francisco startup, is going one step further. They’re working to fund not just the unbanked but the unbankable. Refugees, arguably the people who need our support the most, have historically been seen as unbankable. The thinking was, “Why invest in people who might pack up and go back to their home country?”

By providing microloans to underserved communities that needed them, Kiva proved that conventional wisdom wrong. After funding a collective $5 million to refugees in small loans, Kiva found that refugees were as likely—if not more likely—to repay the loans than other populations.

Giving the People What They Want

The rise in social consciousness in financial services comes at a time when we’re seeing an emphasis on purpose-driven companies in general. We can’t chalk it all up to founder benevolence. The market is driving the demand.

Conscious consumerism is on the rise. Customers are asking for more from companies than a quality product. Millennials and Gen Z’ers care more about the environment, which may play a role in why we’ve seen an increase in consumers looking for companies that care about environmental issues.

What started as a few outliers has gained enough momentum that financial governing bodies are building established standards, like B-corporation certification, to help consumers identify the companies that meet the standards they espouse.