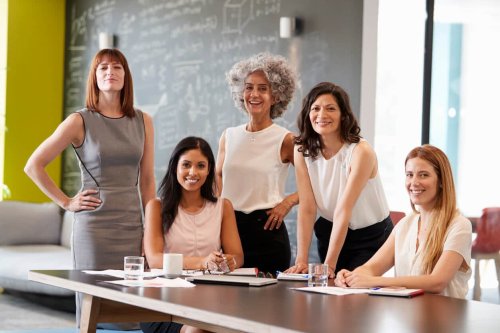 Women are big business. These days, women outnumber men in college and high school graduation rates and are making steady progress toward equal representation in C-suite leadership. Despite holding only 40% of the world’s wealth, women typically drive 70–80% of consumer purchases, according to Bloomberg.

But even though women are a driving force in the world’s economy, there’s still an indisputable lack of women in top corporate leadership positions. The glass ceiling is still intact when it comes to women-owned businesses receiving venture capital funding, to the world economy’s detriment.

Despite this, women around the world are stepping into positions of power, transforming boardrooms, politics, and media. And not only are women participating in the high-stakes corporate world, they’re smashing the competition. Here are 7 women whose careers you should be following.

Mary Barra was appointed the CEO of General Motors in 2014. Since her appointment, she has been investing GM’s future in electric and self-driving cars. Under her leadership, GM beat the mass-market Tesla 3 to market with the Chevy Bolt in 2017. In 2018, GM ranked first on the Global Report on Gender Equity, 1 of only 2 global businesses to do so.

Annie Lamont and Patricia (Tricia) Kemp are cofounders, along with Andrew Adams of Oak HC/FT, a venture capital firm focused on investing in healthcare and fintech. Lamont and Kemp are leading the way, investing capital in early and growth-stage companies that utilize technology to change the healthcare and fintech industries. Women in venture capital are few and far between, but a number of women are starting their own firms to change this—including Lamont and Kemp.

A serial entrepreneur, Amy Jo Miller is helping consumers vote with their wallets as the co-creator and COO at Goods Unite Us, Inc. Goods Unite Us runs political background checks on companies. Reports are broken down by which political party donations have been made to, the top 5 candidates the company has supported, the percentage of donations that were made by the company versus individual donations from senior employees, and more. Their website and app are easy to navigate, allowing users to make decisions easily about where they want to spend their money.

As IBM’s chief human resources officer since 2013, Diane Gherson has turned IBM toward a skills-based workforce. When the adoption of new technology and AI threatened to leave over 350,000 IBM employees without a job, Gherson sought a way to use technology to keep as many of them employed as possible. She spearheaded the use of software that analyzes employees’ skills and moves them to new positions within the company based on those skills, as opposed to their resumes. This novel approach kept almost 80% of those 350,000 employees on the payroll at IBM even after their previous jobs had been made redundant.

Stacy Cunningham made history in 2018 when she was inaugurated as the first female president of the NYSE. As a trading-floor clerk, she was one of approximately 30 women clerks on the floor, in comparison to 1,300 men. Since 2015, when she became the COO of the NYSE, Cunnigham worked her way to the top position by being direct and clear in her communication and by never letting her coworkers treat her as anything less than an equal.

Heather Meeker is a founding portfolio partner at OSS Capital, where she serves as a prominent open-source licensing lawyer. Meeker is an internationally recognized leader in software licensing, using her expertise to help startups big and small to set up business and licensing models. She has helped open-source software companies to structure business models around their free code and has shown them how to put licensing limits on their software in order to keep larger companies from selling this open-source software for their own profit.

RDMD works to connect patients and researchers in order to aid in the faster development of treatment for rare diseases. As cofounder and CEO, Nancy Yu empowers patients to control how their medical data is shared with researchers. Patients can choose to share their de-identified medical records with RDMD rather than keeping them trapped in hospital records or other private databases. RDMD allows patients to control what data is shared and helps with the development of new treatments.