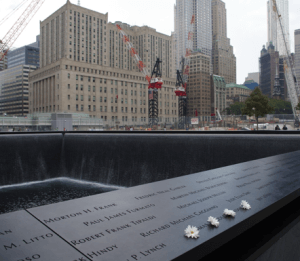 The following was published earlier this year on Forbes, but seemed appropriate for today. Having spent a few hours at ground zero I was moved by the bustle of the city and the businesses that were getting back after it. Always remember and never say die.

Early Monday morning a colleague and I landed at JFK and spent a few days in Manhattan talking to the media for Lendio. We made it a point to visit the memorial at Ground Zero and were moved by the beautiful fountains and the work they’re doing to remember those who lost their lives. I admit to being moved—but almost as powerful as the memorial itself were the sounds of new construction that accompanied us through the bustle of the financial district.

In the aftermath of Hurricane Sandy, the evidence of putting things back together is all over the city. The positive energy associated with the sights and sounds of Manhattan are hard to miss. I can’t help but make the connection to all the small business owners who start every day with a never-say-die attitude as they attack the challenges they face head-on each morning.

I wish we could mainline some of that attitude into the policy-makers in Washington.

About this time last year, in an article published on the Huffington Post, Stanley A. Dashew described starting his first business in the midst of the Great Depression and half-dozen successful businesses since that time (not to mention 40 patents). He offers some suggestions to building a successful small business despite hard times—I couldn’t help but think of this article as I witnessed the resilience of New Yorkers this week.

Dasher described the process he went through to develop the plastic credit card in the 50s. Like most things, Dashew’s suggestions really aren’t new, but well worth considering.

I’m a big fan of learning from the successes of those who have been down the road ahead of me. Dashew started out trying to solve the problem associated with a Diners Club card made of paper. Was he successful? Here’s what he says: “And here’s the cherry on top: Soon, American Express came calling and bought the company we had created to handle the Chase operations. The deal called for cash and a generous amount of Amex stock. Within a year, following the successful conclusion of a lawsuit, Amex stock skyrocketed.”

Is it possible for small business owners to find success in tough times? Yes. What’s more, it isn’t rocket science either. It’s a matter of applying fundamentals along with a New Yorker’s never-say-die attitude.